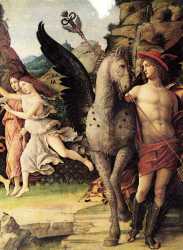 The famous winged horse, whose origin is thus related. When Perseus struck off the head of Medusa, with whom Poseidon had had intercourse in the form of a horse or a bird, there sprang forth from her Chrysaor and the horse Pegasus. The latter obtained the name Pegasus because he was believed to have made his appearance near the sources (πήγαι, pēgai) of Oceanus. Pegasus rose up to the seats of the immortals, and afterwards lived in the palace of Zeus, for whom he carried thunder and lightning.1 According to this view, which is apparently the most ancient, Pegasus was the thundering horse of Zeus; but later writers describe him as the horse of Eos,2 and place him among the stars as the heavenly horse.3

Pegasus also acts a prominent part in the fight of Bellerophon against the Chimaera.4 After Bellerophon had tried and suffered much to obtain possession of Pegasus for his fight against the Chimaera, he consulted the soothsayer Polyidus at Corinth. The latter advised him to spend a night in the temple of Athena, and, as Bellerophon was sleeping, the goddess appeared to him in a dream, commanding him to sacrifice to Poseidon, and gave him a golden bridle. When he awoke he found the bridle, offered the sacrifice, and caught Pegasus, who was drinking at the well Pirene.5 According to some Athena herself tamed and bridled Pegasus, and surrendered him to Bellerophon,6 or Bellerophon received Pegasus from his own father Poseidon.7

After he had conquered the Chimaera (Pindar8 says that he also conquered the Amazons and the Solymi), he endeavored to rise up to heaven with his winged horse, but fell down upon the earth, either from fear or from giddiness, or being thrown off by Pegasus, who was rendered furious by a gad-fly which Zeus had sent. But Pegasus continued his flight.9 Whether Hesiod considered Pegasus as a winged horse, cannot be inferred with certainty from the word ἀποπτάμενοσε (apoptamenose); but Pindar, Euripides, and the other later writers, expressly mention his wings.

Pegasus lastly was also regarded as the horse of the Muses, and in this capacity he is more celebrated in modern times than he ever was in antiquity; for with the ancients he had no connection with the Muses, except that by his hoof he called forth the inspiring well Hippocrene.

The story about this well runs as follows. When the nine Muses engaged in a contest with the nine daughters of Pierus on Mount Helicon, all became darkness when the daughters of Pierus began to sing; whereas during the song of the Muses, heaven, the sea, and all the rivers stood still to listen, and Helicon rose heavenward with delight, until Pegasus, on the advice of Poseidon, stopped its rising by kicking it with his hoof;10 and from this kick there arose Hippocrene, the inspiring well of the Muses, on Mount Helicon, which, for this reason, Persius11 calls fons caballinus.12 Others again relate that Pegasus caused the well to gush forth because he was thirsty; and in other parts of Greece also similar wells were believed to have been called forth by Pegasus, such as Hippocrene, at Troezen, and Pirene, near Corinth.13

Pegasus is often seen represented in ancient works of art and on coins along with Athena and Bellerophon, mainly on those from Corinth, Corcyra, and Syracuse. A terra-cotta relief from Melos depicts Bellerophon and Pegasus battling the Chimaera. A Roman relief shows Bellerophon with Pegasus who is drinking from a spring. The horse is usually depicted with wings but occasionally without, such as on one of the metopes at the temple C at Selinus (early sixth century BCE), which shows Medusa, while being decapitated by Perseus, embracing Pegasus with her right arm.