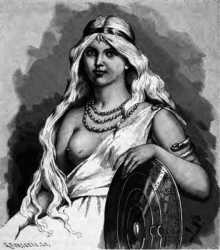 "Gem-glad." A beautiful maiden who lived in the hall Gastropnir, enclosed within walls of fire and clay, and guarded by the jötunn Fjölsviðr and his two dogs Gifr and Geri. The name of her mother is not stated, but the name of her father is Svafrþorin. She was destined to be the bride of Svipdagr and their story is told in the eddic poem Fjölsvinnsmál.