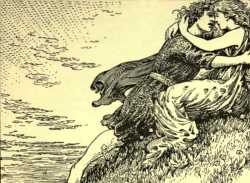 "Swift day." The hero of the Old Norse poems Grógaldr and Fjölsvinnsmál, which are also known combined under the title of Svipdagsmál. Svipdagr is the son of Sólbjartr and Gróa, a völva. His stepmother bade him forth where none may fare to seek the maiden Menglöð, his fated bride. He raises his mother from the dead to ask for her help. Gróa casts nine spells for him and returns to her grave, and Svipdagr, thus fortified, sets off to find Menglöð.

After a long search he arrives at a great house set all about with flames, and before it a giant. This giant, who identifies himself as Fjölsviðr, stops Svipdagr with the customary threats and says that he shall never enter the house. Fjölsviðr then inquires about the kindred from which Svipdagr comes, and the latter identifies himself as Vindkaldr, son of Várkaldr, son of Fjölkaldr, apparently in an attempt to persuade Fjölsviðr that he belongs to the race of frost giants.

Svipdagr then asks a series of questions regarding Menglöð, her home, the surroundings, and other matters, which the giant duly answers. He then asks if there is a man in Menglöð's life. Fjölsviðr replies no man may sleep in her arms save Svipdagr, for she is destined to be his bride. At that point Svipdagr reveals his true name and is allowed to enter.

Menglöð asks him for a token of his identify and he says to her:

Svipgdag I am named,
Solbiart was my father named;
thence the winds on the cold ways drove me.
Urd's decree
may no one gainsay,
however lightly uttered.

She tells him that she has long sat on her hill waiting for him, and that which she had hoped for has come to pass: that he has again come to her hall.

The story of Svipdag and Menglöð is not referred to elsewhere in the Poetic Edda, nor is it mentioned by Snorri Sturluson.

A Svipdagr (Svebdeg) is found the Prose Edda as a descendant of Vegdeg, a son of Odin. It is also the name of one of the twelve berserkers of king Hrólfr Kraki.