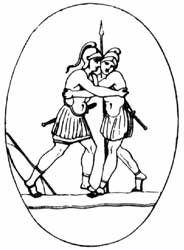 A son of Tydeus and Deipyle, the husband of Aegiale, and the successor of Adrastus in the kingdom of Argos, though he was descended from an Aetolian family.1

The Homeric tradition about him is as follows: — His father Tydeus fell in the expedition against Thebes, while Diomedes was yet a boy;2 but he himself afterwards was one of the Epigoni who took Thebes.3 Diomedes went to Troy with Sthenelus and Euryalus, carrying with him in eighty ships warriors from Argos, Tiryns, Hermione, Asine, Troezen, Eionae, Epidaurus, Aegina, and Mases.4 In the army of the Greeks before Troy, Diomedes was, next to Achilles, the bravest among the heroes; and, like Achilles and Odysseus, he enjoyed the special protection of Athena, who assisted him in all dangerous moments.5 He fought with the most distinguished among the Trojans, such as Hector and Aeneas,6 and even with the gods who espoused the cause of the Trojans. He thus wounded Aphrodite and drove her from the field of battle,7 and Ares himself was likewise wounded by him.8

Diomedes was wounded by Pandareus, whom, however, he afterwards slew with many other Trojans.9 In the attack of the Trojans on the Greek camp, he and Odysseus offered a brave resistance, but Diomedes was wounded and returned to the ships.10 He wore a cuirass made by Hephaestus, but sometimes also a lion's skin.11 At the funeral games of Patroclus he conquered in the chariot-race, and received a woman and a tripod as his prize.12 He also conquered the Telamonian Ajax in single combat, and won the sword which Achilles had offered as the prize.13 He is described in the Iliad in general as brave in war and wise in council,14 in battle furious like a mountain torrent, and the terror of the Trojans, whom he chases before him, as a lion chases goats.15 He is strong like a god,16 and the Trojan women during their sacrifice to Athena pray to her to break his spear and to make him fall.17 He himself knows no fear, and refuses his consent when Agamemnon proposes to take to flight, and he declares that, if all flee, he and his friend Sthenelus will stay and fight till Troy shall fall.18

The story of Diomedes, like those of other heroes of the Trojan time, has received various additions and embellishments from the hands of later writers, of which we shall notice the principal ones. After the expedition of the Epigoni he is mentioned among the suitors of Helen,19 and his love of Helen induced him to join the Greeks in their expedition against Troy with thirty ships.20 Being a relative of Thersites, who was slain by Achilles, he did not permit the body of the Amazon Penthesilea to be honorably buried, but dragged her by the feet into the river Scamander.21 Philoctetes was persuaded by Diomedes and Odysseus to join the Greeks against Troy.22 Diomedes conspired with Odysseus against Palamedes, and under the pretense of having discovered a hidden treasure, they let him down into a well and there stoned him to death.23

After the death of Paris, Diomedes and Odysseus were sent into the city of Troy to negotiate for peace,24 but he was afterwards one of the Greeks concealed in the wooden horse.25 When he and Odysseus had arrived in the arx of Troy by a subterraneous passage, they slew the guards and carried away the Palladium,26 as it was believed that Ilium could not be taken so long as the Palladium was within its walls. When, during the night, the two heroes were returning to the camp with their precious booty, and Odysseus was walking behind him, Diomedes saw by the shadow of his companion that he was drawing his sword in order to kill him, and thus to secure to himself alone the honor of having taken the Palladium. Diomedes, however, turned round, seized the sword of Odysseus, tied his hands, and thus drove him along before him to the camp.27 Diomedes, according to some, carried the Palladium with him to Argos, where it remained until Ergiaeus, one of his descendants, took it away with the assistance of the Laconian Leagrus, who conveyed it to Sparta.28 According to others, Diomedes was robbed of the Palladium by Demophon in Attica, where he landed one night on his return from Troy, without knowing where he was.29 A third tradition stated, that Diomedes restored the Palladium and the remains of Anchises to Aeneas, because he was informed by an oracle, that he should be exposed to unceasing sufferings unless he restored the sacred image to the Trojans.30

On his return from Troy, he had like other heroes to suffer much from the enmity of Aphrodite, but Athena still continued to protect him. He was first thrown by a storm on the coast of Lycia, where he was to be sacrificed to Ares by King Lycus; but Callirrhoe, the king's daughter, took pity upon him, and assisted him in escaping.31 On his arrival in Argos he met with an evil reception which had been prepared for him either by Aphrodite or Nauplius, for his wife Aegiale was living in adultery with Hippolytus, or according to others, with Cometes or Cyllabarus.32 He therefore quitted Argos either of his own accord, or he was expelled by the adulterers,33 and went to Aetolia. His going to Aetolia and the subsequent recovery of Argos are placed in some traditions immediately after the war of the Epigoni, and Diomedes is said to have gone with Alcmaeon to assist his grandfather Oeneus in Aetolia against his enemies. During the absence of Diomedes, Agamemnon took possession of Argos; but when the expedition against Troy was resolved upon, Agamemnon from fear invited Diomedes and Alcmaeon back to Argos, and asked them to take part in the projected expedition. Diomedes alone accepted the proposal, and thus recovered Argos.34

According to another set of traditions, Diomedes did not go to Aetolia till after his return from Troy, when he was expelled from Argos, and it is said that he went first to Corinth; but being informed there of the distress of Oeneus, he hastened to Aetolia to assist him. Diomedes conquered and slew the enemies of his grandfather, and then took up his residence in Aetolia.35 Other writers make him attempt to return to Argos, but on his way home a storm threw him on the coast of Daunia in Italy. Daunus, the king of the country, received him kindly, and solicited his assistance in a war against the Messapians. He promised in return to give him a tract of land and the hand of his daughter Euippe. Diomedes defeated the Messapians, and distributed their territory among the Dorians who had accompanied him. In Italy Diomedes gave up his hostility against the Trojans, and even assisted them against Turnus.36 He died in Daunia at an advanced age, and was buried in one of the islands off cape Garganus, which were called after him the Diomedean islands. Subsequently, when Daunus too had died, the Dorians were conquered by the Illyrians, but were metamorphosed by Zeus into birds.37 According to Tzetzes, Diomedes was murdered by Daunus, whereas according to others he returned to Argos, or disappeared in one of the Diomedean islands, or in the country of the Heneti.38

A number of towns in the eastern part of Italy, such as Beneventum, Aequumtuticum, Argos Hippion (afterwards Argyripa or Arpi), Venusia or Aphrodisia, Canusium, Venafrum, Salapia, Spina, Sipus, Garganum, and Brundusium, were believed to have been founded by Diomedes.39 The worship and service of gods and heroes was spread by Diomedes far and wide: in and near Argos he caused temples of Athena to be built;40 his armor was preserved in a temple of Athena at Luceria in Apulia, and a gold chain of his was shown in a temple of Artemis in Peucetia. At Troezen he had founded a temple of Apollo Epibaterius, and instituted the Pythian games there. He himself was subsequently worshiped as a divine being, especially in Italy, where statues of him existed at Argyripa, Metapontum, Thurii, and other places.41

There are traces in Greece also of the worship of Diomedes, for it is said that he was placed among the gods together with the Dioscuri, and that Athena conferred upon him the immortality which had been intended for his father Tydeus. It has been conjectured that Diomedes is an ancient Pelasgian name of some divinity, who was afterwards confounded with the hero Diomedes, so that the worship of the god was transferred to the hero.42

According to Antonius Liberalis, his son by Euippe, the daughter of Daunus, is also called Diomedes.43

Diomedes, the son of Tydeus, is portrayed on many Greek vases in scenes related to the Iliad, such as a Chalcidian amphora (ca. 55 BCE) where he is a wounded warrior attended to by Sthenelus. He was also represented in a painting on the acropolis of Athens in the act of carrying away the Palladium from Troy,43 and Polygnotus had painted him in the Lesche at Delphi.44

For other occurances of the name "Diomedes", click here.