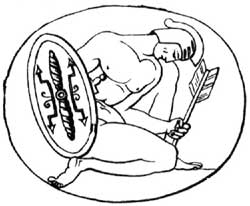 In the legends about Achilles, as about all the heroes of the Trojan war, the Homeric traditions should be carefully kept apart from the various additions and embellishments with which the gaps of the ancient story have been filled up by later poets and mythographers, not indeed by fabrications of their own, but by adopting those supplementary details, by which oral tradition in the course of centuries had variously altered and developed the original kernel of the story, or those accounts which were peculiar only to certain localities.

Achilles was the son of Peleus, king of the Myrmidones in Phthiotis, in Thessaly, and of the Nereid Thetis.1 From his father's name he is often called Pelides (Πηλείδης), Peleïades (Πηληϊάδης), or Peleion (Πηλείων),2 and from that of his grandfather Aeacus, he derived his name Aeacides (Αἰακίδης).3 He was educated from his tender childhood by Phoenix, who taught him eloquence and the arts of war, and accompanied him to the Trojan war, and to whom the hero always showed great attachment.4 In the healing art he was instructed by Chiron, the centaur.5 His mother Thetis foretold him that his fate was either to gain glory and die early, or to live a long but inglorious life.6 The hero chose the latter, and took part in the Trojan war, from which he knew that he was not to return.

In fifty ships, or according to later traditions, in sixty,7 he led his hosts of Myrmidons, Hellenes, and Achaeans against Troy.8 Here the swift-footed Achilles was the great bulwark of the Greeks, and the worthy favorite of Athena and Hera.9 Previous to his dispute with Agamemnon, he ravaged the country around Troy, and destroyed twelve towns on the coast and eleven in the interior of the country.10 When Agamemnon was obliged to give up Chryseïs to her father, he threatened to take away Briseis from Achilles, who surrendered her on the persuasion of Athena, but at the same time refused to take any further part in the war, and shut himself up in his tent. Zeus, on the entreaty of Thetis, promised that victory should be on the side of the Trojans, until the Achaeans should have honored her son.11 The affairs of the Greeks declined in consequence, and they were at last pressed so hard, that Agamemnon advised them to take to flight.12 But other chiefs opposed this counsel, and an embassy was sent to Achilles, offering him rich presents and the restoration of Briseis;13 but in vain. At last, however, he was persuaded by Patroclus, his dearest friend, to allow him to make use of his men, his horses, and his armor.14 Patroclus was slain, and when this news reached Achilles, he was seized with unspeakable grief. Thetis consoled him, and promised new arms, which were to be made by Hephaestus, and Iris appeared to rouse him from his lamentations, and exhorted him to rescue the body of Patroclus.15

Achilles now rose, and his thundering voice alone put the Trojans to flight. When his new armor was brought to him, he reconciled himself to Agamemnon, and hurried to the field of battle, disdaining to take any drink or food until the death of his friend should be avenged.16 He wounded and slew numbers of Trojans,17 and at length met Hector, whom he chased thrice around the walls of the city. He then slew him, tied his body to his chariot, and dragged him to the ships of the Greeks.18 After this, he burnt the body of Patroclus, together with twelve young captive Trojans, who were sacrificed to appease the spirit of his friend; and subsequently gave up the body of Hector to Priam, who came in person to beg for it.19

Achilles himself fell in the battle at the Scaean gate, before Troy was taken. His death itself does not occur in the Iliad, but it is alluded to in a few passages.20 It is expressly mentioned in the Odyssey,21 where it is said that his fall — his conqueror is not mentioned — was lamented by gods and men, that his remains together with those of Patroclus were buried in a golden urn which Dionysus had given as a present to Thetis, and were deposited in a place on the coast of the Hellespont, where a mound was raised over them.

Achilles is the principal hero of the Iliad, and the poet dwells upon the delineation of his character with love and admiration, feelings in which his readers cannot but sympathize with him. Achilles is the handsomest and bravest of all the Greeks; he is affectionate towards his mother and his friends, formidable in battles, which are his delight; open-hearted and without fear, and at the same time susceptible to the gentle and quiet joys of home. His greatest passion is ambition, and when his sense of honor is hurt, he is unrelenting in his revenge and anger, but withal submits obediently to the will of the gods.

These chiefly consist in accounts which fill up the history of his youth and death. His mother wishing to make her son immortal, is said to have concealed him by night in fire, in order to destroy the mortal parts he had inherited from his father, and by day she anointed him with ambrosia. But Peleus one night discovered his child in the fire, and cried out in terror. Thetis left her son and fled, and Peleus entrusted him to Chiron, who educated and instructed him in the arts of riding, hunting, and playing the phorminx, and also changed his original name, Ligyron, i.e. the "whining," into Achilles.22 Chiron fed his pupil with the hearts of lions and the marrow of bears. According to other accounts, Thetis endeavored to make Achilles immortal by dipping him in the river Styx, and succeeded with the exception of the ankles, by which she held him,23 while others again state that she put him in boiling water to test his immortality, and that he was found immortal except at the ankles. From his sixth year he fought with lions and bears, and caught stags without dogs or nets. The muse Calliope gave him the power of singing to cheer his friends at banquets.24

When he had reached the age of nine, Calchas declared that Troy could not be taken without his aid, and Thetis knowing that this war would be fatal to him, disguised him as a maiden, and introduced him among the daughters of Lycomedes of Scyros, where he was called by the name of Pyrrha on account of his golden locks. But his real character did not remain concealed long, for one of his companions, Deidamea, became mother of a son, Pyrrhus or Neoptolemus, by him. The Greeks at last discovered his place of concealment, and an embassy was sent to Lycomedes, who, though he denied the presence of Achilles, yet allowed the messengers to search his palace. Odysseus discovered the young hero by a stratagem: he placed women's trinkets in the fore-court of the palace, and among them a shield and a spear. He bade the trumpeter blow the trumpet all of a sudden, and called for clash of arms and shouting. Achilles, thinking the enemy was at hand, stripped off his woman's garb and seized shield and spear. Thus recognized, Achilles immediately promised his assistance to the Greeks.25 A different account of his stay in Scyros is given by Plutarch26 and Philostratus.27

During the war against Troy, Achilles slew Penthesilea, an Amazon, but was deeply moved when he discovered her beauty; and when Thersites ridiculed him for his tenderness of heart, Achilles killed the scoffer by a blow with the fist.28 He also fought with Memnon and Troilus.29

The accounts of his death differ very much, though all agree in stating that he did not fall by human hands, or at least not without the interference of the god Apollo. According to some traditions, he was killed by Apollo himself,30 as he had been foretold.31 According to Hyginus,32 Apollo assumed the appearance of Paris in killing him, while others say that Apollo merely directed the weapon of Paris against Achilles, and thus caused his death, as had been suggested by the dying Hector.33 Dictys Cretensis34 relates his death thus: Achilles loved Polyxena, a daughter of Priam, and tempted by the promise that he should receive her as his wife, if he would join the Trojans, he went without arms into the temple of Apollo at Thymbra, and was assassinated there by Paris.35 His body was rescued by Odysseus and Ajax the Telamonian; his armor was promised by Thetis to the bravest among the Greeks, which gave rise to a contest between the two heroes who had rescued his body.

After his death, Achilles became one of the judges in the lower world, and dwelt in the islands of the blessed, where he was united with Medea or Iphigeneia. The fabulous island of Leuce in the Euxine was especially sacred to him, and was called Achillea, because, according to some reports, it contained his body.36

Achilles was worshiped as one of the national heroes of Greece. The Thessalians, at the command of the oracle of Dodona, offered annual sacrifices to him in Troas.37 In the ancient gymnasium at Olympia there was a cenotaph, at which certain solemnities were performed before the Olympic games commenced.38 Sanctuaries of Achilles existed on the road from Arcadia to Sparta,39 on cape Sigeum in Troas,40 and other places. The events of his life were frequently represented in ancient works of art.41

A Phrygian burial mound near Cape Sigeum was regarded by the ancients as the grave of Achilles.

The achillea, a large genus of plants of the thistle family, is named after Achilles' spear or, in some traditions, for a plant that Achilles used to cure Telephus. The expression "Achilles heel," a small but fatal weakness, derives from him.

He can also be found on vase paintings that depict scenes from the Trojan War. The fresco in the Tomba dei Tori (ca. 650 BCE) shows Achilles, hidden behind a fountain monument, awaiting the arrival of Troilus. Pompeian frescoes show Achilles with Menelaus (temple of Apollo), departing with Briseis (Casa del Poeta Tragico), and among the daughters of King Lycomedes on Skyros (Casa dei Dioscuri).
In sculpted art there is Scopas' "Achilles and Troilus," made for the temple of Athena at Tegea (ca. 380 BCE) but which is largely lost. Only a few representations have been made during the Middle Ages, among which the famous Achilles-series by Rembrandt. In the 19th century, Achilles has been portrayed by Leighton and other history painters.