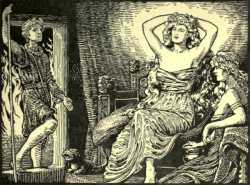 "Bright one." The servant of Freyr. He acts as Freyr's intermediary in the wooing of the beautiful giantess Gerðr, which is recounted in the eddic poem Skírnismál, the "Lay of Skírnir."

When Njörðr and Skaði see that Freyr has become greatly troubled, they ask Skírnir to talk to him. Freyr tells his servant about the maiden he saw walking in Gýmir's court. Skírnir offers to travel to Jötunheimr, and asks for the horse that goes through the dark and magic flickering flames, and the sword that fights of itself against the giants. These he is given.

Skírnir rides to Jötunheimr, to Gýmir's home, where fierce dogs are chained at the enclosure that was around the hall. He rides on to where a cowherd was sitting on a mound, and starts to ask him several questions. The sound of their conversation is heard by Gerðr, who bids one of her serving-women to invite the stranger into the house. She asks for the purpose of his visit, and Skírnir explains that he is there on behalf of Freyr. He first offers her eleven golden apples, but these she would not accept for any mortal's pleasure. He then offers her the ring Draupnir, but again Gerdr is not interested, saying she has no lack of gold in Gýmir's court. Skírnir then threatens to cut off her head with Freyr's sword and to kill her father, but this too has no effect. It is only when he threatens to curse her and strike her with his gambantein that Gerðr agrees to meet with Freyr, nine nights hence at a secluded place called Barri. Skírnir then returns home and tells Freyr of the success.

According to Gylfaginning, chapter 34, Odin uses Skírnir to run errands for him, which included a trip to the dwarfs to have them make the fetter Gleipnir.