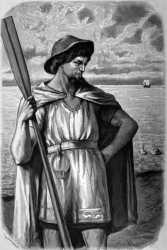 The Norse god of the sea and ruler of the winds, originally one of the Vanir. He is the father of Freyr and Freyja. Although counted among the Æsir, they maintain their affiliation with their former kin. Snorri Sturluson describes him as follows:

The third among the Æsir is he that is called Njördr: he dwells in heaven, in the abode called Nóatún. He rules the course of the wind, and stills sea and fire; on him shall men call for voyages and for hunting. He is so prosperous and abounding in wealth, that he may give them great plenty of lands or of gear; and him shall men invoke for such things. Njördr is not of the race of the Æsir: he was reared in the land of the Vanir, but the Vanir delivered him as hostage to the gods, and took for hostage in exchange him that men call Hœnir; he became an atonement between the gods and the Vanir.

His origin is also mentioned in Vafþrúðnismál. Odin asks the wise giant Vafþrúðnir whence Njörðr came from, and the jötunn answers:

In Vanaheim wise
powers him created,
and to the gods a hostage gave.
At the world's dissolution
he will return
to the wise Vanir.

Njörðr married Skaði, the daughter of Þjazi. After the death of her father she went to the Æsir to seek vengeance. The gods offered her reconciliation and atonement. They said that she could choose for herself a husband from among the Æsir but choose by the feet only, seeing no more of him. Skaði chose the god with the fairest feet, expecting that it would be Baldr, but it was Njörðr of Nóatún. Their marriage was not a happy one. Skaði preferred to dwell in her father's abode, Þrymheimr, in the mountains, while Njörðr would rather stay in his seaside home of Nóatún. They agreed to compromise by spending nine nights at Þrymheimr and then nine at Nóatún, but neither could endure the surroundings of the other's home, so each returned to their own dwelling.

According to Snorri, Njörðr afterward begot in Nóatún two children: a son, Freyr, and a daughter, Freyja. The name of the mother is nowhere mentioned, but this might be either his sister or Skaði. In Skírnirsmal, Skaði asks Freyr's servant Skírnir to go and request our son to speak, and in Lokasenna all four are present at Ægir's feast. Yet in the same poem, Loki accuses Njörðr to have fathered Freyr on own his sister. Snorri says in Ynglinga saga, chapter 4, that while Njörðr was with the Vanir he had taken his own sister in marriage, which was allowed by their law; and their children were Freyr and Freyja.

The exchange of hostages between the Æsir and Vanir is also mentioned in chapter 4 of Ynglinga saga, Snorri's history of the ancient Norse kings. Odin placed Njörðr and Freyr as priests, and Freyja as priestess of the sacrifices. In chapter 11, Snorri writes that after Njörðr succeeded Odin after his death:

Njord of Noatun was then the sole sovereign of the Swedes; and he continued the sacrifices, and was called the drott or sovereign by the Swedes, and he received scatt and gifts from them. In his days were peace and plenty, and such good years, in all respects, that the Swedes believed Njord ruled over the growth of seasons and the prosperity of the people. In his time all the diar or gods died, and blood-sacrifices were made for them. Njord died on a bed of sickness, and before he died made himself be marked for Odin with the spear-point. The Swedes burned him, and all wept over his grave-mound.