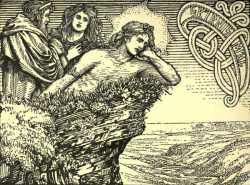 "Lord." The god of fertility, farming, and weather, and one of the most important and renowned gods in the Norse pantheon. Snorri Sturluson says of him in Gylfaginning, chapter 24:

Freyr is the most renowned of the Æsir; he rules over the rain and the shining of the sun, and therewithal the fruit of the earth; and it is good to call on him for fruitful seasons and peace. He governs also the prosperity of men.

Freyr is the son of Njörðr, and brother of Freyja; his mother is not named, but Loki says in Lokasenna, stanza 36, that Njörðr had Freyr by his own sister. This is collaborated in Ynglinga saga, where Snorri says that Njörðr had taken his own sister in marriage, which was allowed by Vanir law, and that their children were Freyr and Freyja. Although all three technically belong to the Vanir, and are among their most distinguished, they dwell among the Æsir and are counted in their number. Freyr and his father were given to them as hostages, or human pledge, after the Æsir-Vanir war, and Odin placed them as priests, and Freyja as priestess of the sacrifice.

The eddic poem Skírnismál gives an account of the courtship of Freyr and the beautiful giantess Gerðr. It is the longest narrative about him, although he plays only a minor part in it. One day, as he was seated in Hliðskjálf, he looked out over Jötunheimr and saw there a fair maiden, as she was passing from her father's dwelling to her bower. Immediately he felt a love-sickness and becomes greatly troubled. Njörðr sends Freyr's servant Skírnir to talk to his son and Freyr reveals the cause of his sorrow:

6. In Gýmir's courts
I saw walking
a maid for whom I long.
Her arms gave forth light
wherewith shone
all air and water.

7. Is more desirable
to me that maid
than to any youth
in early days;
yet will no one,
Æsir or Alfar,
that we together live.

Skírnir offers to travel to Jötunheimr to woo Gerðr for him. To aid him on his journey Freyr gives him the horse that goes through the dark and magic flickering flames and the sword that fights giants of itself. It is only after long bargaining and cajoling — not to mention threatening her with a curse — that Gerðr agrees to meet with Freyr at a secluded grove called Barri. She becomes his wife.

The episode is referenced in Lokasenna, stanza 42, in which Loki accuses Freyr of having bought the daughter of Gýmir with gold and with his sword. Loki further states that when Múspell's sons ride through Myrkviðr, Freyr shall have nothing to fight with. The loss of his sword will ultimately be the cause of his death. According to stanza 53 in Völuspá, in which Freyr is called the bright slayer of Beli, in reference to having killed the giant Beli with the horn of a stag, he shall fight Surtr at the time of Ragnarök. Snorri in Gylfaginning says that Freyr will die in the encounter and that his death will be due to the fact that he had given away his sword.

Among Freyr's possessions are Álfheimr, the home of the elves, given to him as a teething present; the ship Skíðblaðnir; and the boar Gullinbursti, which he rode to Baldr's funeral. His two servants are called Byggvir and Beyla.

Freyr is periphrased as Son of Njördr, Brother of Freyja, and also God of Vanir, and Kinsman of the Vanir, and Wane, and God of the Fertile Season, and God of Wealth-Gifts, and Adversary of Beli.

In chapter 12 of Ynglinga saga, Freyr is an early Swedish king who inherits the kingdom from his father Njördr, who was a son of Odin. He built a great temple at Uppsala and made it his seat. The Peace of Fródi began in his days and these were prosperous times, and his subjects worshiped him more than the other gods. His wife was Gerðr, daughter of Gýmir, and their son was called Fjölnir (Fjolne). As he was also known as Yngve, his descendants were called Ynglingar. Freyr became sick and during that time his men raised a large mound. After his death he was secretly placed in the mound but his men told the Swedes that he was still alive; and they kept watch over him for three years. They brought all the taxes into the mound, and peace and good seasons continued. In Saxo Grammaticus' Gesta Danorum, chapter 5, the death of King Fróði is similarly concealed for three years to avoid disturbance within and danger from without.

Icelandic sources mention several characters named Freysgoði, "priest of Frey," and in Hrafnkels saga Freysgoða the protagonist Hrafnkel, a dedicated worshiper of Freyr, recounts his gradual alienation from the god. Other mentions are found in Gísla saga and Víga-Glúms saga. A yearly sacrifice to Frø (Freyr), and called frøblot, was established by Hadingus, according to Gesta Danorum.