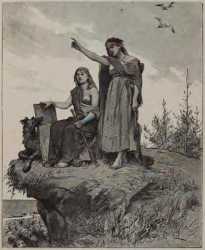 Several völvas are mentioned in the Poetic Edda. In Völuspá, Odin, the chief of the gods, calls on a certain völva in his search for knowledge. She speaks to him unwillingly, being compelled to do so by his magic power. The völva first tells him of the past, of the creation of the world, and then she discloses some of Odin's own secrets and the details of his search for knowledge. Finally, she turns to real prophesy and discloses the final destruction of the gods.

In Baldrs draumar Odin raises völva from the grave by magic and mighty charms to answer questions about Baldr's fate. Another völva, named Hyndla, is awakened by the goddess Freyja to trace the ancestry of her protégé Óttar. The story is told in the eddic poem Hyndluljóð.

In the poem Grógaldr, in Svipdagsmál, the völva Gróa is raised from the dead by her son Svipdagr. She helps him by casting nine spells for him.