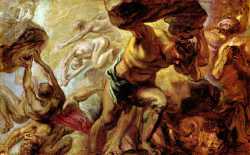 The contest of Zeus and the Olympian deities against Cronus and the ruling Titans. The Titanomachy, which was carried on in Thessaly, with the Titans occupying Mount Othrys, and the sons of Cronus Mount Olympus, lasted for ten years, when at length Gaea promised victory to Zeus, if he would deliver the Cyclopes and Hecatonchires from Tartarus.

Zeus accordingly slew Campe, who guarded the Cyclopes, and the latter furnished him with thunder and lightning, Hades gave him a helmet, and Poseidon a trident. The Titans then were overcome, and hurled down into a cavity below Tartarus, and the Hecatonchires were set to guard them.