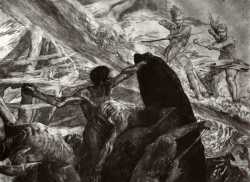 These Titans are Oceanus, Coeus, Crius, Hyperion, Iapetus, Cronus, Theia, Rhea, Themis, Mnemosyne Phoebe, and Tethys, to whom Apollodorus2 adds Dione.3 Some writers also add Phorcys and Demeter.4 Stephanus of Byzantium5 has the following as the names of the children of Uranus and Gaea: Adanus, Ostasus, Andes, Cronus, Rhea, Iapetus, Olymbrus; and Pausanias6 mentions a Titan Anytus, who was believed to have brought up the Arcadian Despoena.

Uranus, the first ruler of the world, threw his sons, the Hecatonchires — Briareus, Cottus, Gyges7 — and the Cyclopes — Arges, Steropes, and Brontes — into Tartarus. Gaea, indignant at this, persuaded the Titans to rise against their father, and gave to Cronus an adamantine sickle (ἄρπη). They did as their mother bade them, with the exception of Oceanus. Cronus, with his sickle, unmanned his father, and threw the part into the sea, and out of the drops of his blood there arose the Erinyes — Alecto, Tisiphone, and Megaera. The Titans then deposed Uranus, liberated their brothers who had been cast into Tartarus, and raised Cronus to the throne. But he again threw the Cyclopes into Tartarus, and married his sister Rhea (Ovid8 calls her Ops).

As, however, he had been foretold by Gaea and Uranus, that he should be dethroned by one of his own children, he, after their birth, swallowed successively his children Hestia, Demeter, Hera, Hades, and Poseidon. Rhea therefore, when she was pregnant with Zeus, went to Crete, gave birth to the child in the Dictaean Cave, and entrusted him to be brought up to the Curetes, and the daughters of Melisseus, the nymphs Adrasteia and Ide. The armed Curetes guarded the infant in the cave, and struck their shields with their spears, that Cronus might not hear the voice of the child. Rhea, moreover, deceived Cronus by giving him a stone wrapped up in cloth, which he swallowed, believing it to be his newly-born son.9

When Zeus had grown up he availed himself of the assistance of Metis, the daughter of Oceanus who gave to Cronus a potion which caused him to bring up the stone and the children he had swallowed. United with his brothers and sisters, Zeus now began the contest against Cronus and the ruling Titans. This contest (usually called the Titanomachy), which was carried on in Thessaly, the Titans occupying Mount Othrys, and the sons of Cronus Mount Olympus, lasted for ten years, when at length Gaea promised victory to Zeus, if he would deliver the Cyclopes and Hecatonchires from Tartarus. Zeus accordingly slew Campe, who guarded the Cyclopes, and the latter furnished him with thunder and lightning, Hades gave him a helmet, and Poseidon a trident. The Titans then were overcome, and hurled down into a cavity below Tartarus,10 and the Hecatonchires were set to guard them.11 It must be observed that the fight of the Titans is sometimes confounded by ancient writers with the fight of the Gigantes.

The name Titans is also given to those divine or semi-divine beings who were descended from the Titans, such as Prometheus, Hecate,12Latona,13 Pyrrha,14 and especially Helios and Selene (Mene), as the children of Hyperion and Theia, and even the descendants of Helios, such as Circe.15

The name Titans, lastly, is given to certain tribes of men from whom all mankind is descended. Thus the ancient city of Cnosos in Crete is said to have originally been inhabited by Titans, who were hostile to Zeus, but were driven away by Pan with the fearful sounds of his shell-trumpet.16

The Titans as such were seldom depicted. A few of them appear on the frieze of the large altar of Zeus at Pergamon (ca. 150 BCE). Characters from the Titanomachy and Gigantomachy often appear intermingled in ancient art.