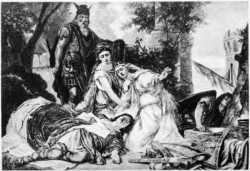 "Hall of the slain." The great golden hall in Glaðsheimr where Odin gathers the einherjar, the chosen heroes that have fallen in battle. It is described in Grímnismál:

9. Esily to be known is,
by those who to Odin come,
the mansion by its aspect.
Its roof with spears is laid,
its hall with shields is decked,
with corslets are its benches strewed.

10. Easily to be known is,
by those who to Odin come,
the mansion by its aspect.
A wolf hangs
before the western door,
over it an eagle hovers.

Later in the poem the hall is said to have five hundred and forty doors, through each door eight hundred warriors can pass at a time.

It is in Valhalla that the einherjar await the last battle at Ragnarök, meanwhile spending their days feasting and fighting. Odin joins the warriors in feast but does not eat with them, subsisting only on wine.

The tree or grove Glasir stands in front of the hall. Another tree stands nearby, called Læraðr. The goat Heiðrún grazes upon its branches and the mead that flows from her udders is served to the einherjar by the valkyries. The river Þund surrounds Valhalla.