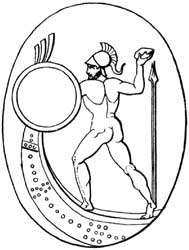 A son of Telamon, king of Salamis, by Periboea or Eriboea,1 and a grandson of Aeacus. Homer calls him Ajax the Telamonian, Ajax the Great, or simply Ajax,2 whereas the other Ajax, the son of Oileus, is always distinguished from the former by some epithet.

According to Homer Ajax joined the expedition of the Greeks against Troy, with his Salaminians, in twelve ships,3 and was next to Achilles the most distinguished and the bravest among the Greeks.4 He is described as tall of stature, and his head and broad shoulders as rising above those of all the Greeks;5 in beauty he was inferior to none but Achilles.6 When Hector challenged the bravest of the Greeks to single combat, Ajax came forward among several others. The people prayed that he might fight, and when the lot fell to Ajax,7 and he approached, Hector himself began to tremble.8 He wounded Hector and dashed him to the ground by a huge stone. The combatants were separated, and upon parting they exchanged arms with one another as a token of mutual esteem.9

Ajax was also one of the ambassadors whom Agamemnon sent to conciliate Achilles.10 He fought several times besides with Hector, as in the battle near the ships of the Greeks,11 and in protecting the body of Patroclus.12 In the games at the funeral pile of Patroclus, Ajax fought with Odysseus, but without gaining any decided advantage over him,13 and in like manner with Diomedes. In the contest about the armor of Achilles, he was conquered by Odysseus, and this, says Homer, became the cause of his death.14 Odysseus afterwards met his spirit in Hades, and endeavored to appease it, but in vain.

Thus far the story of Ajax, the Telamonian, is related in the Homeric poems. Later writers furnish us with various other traditions about his youth, but more especially about his death, which is so vaguely alluded to by Homer. According to Apollodorus15 and Pindar,16 Ajax became invulnerable in consequence of a prayer which Heracles offered to Zeus, while he was on a visit in Salamis. The child was called Aias (Αἴας), from ἀετός (aetos), an eagle, which appeared immediately after the prayer as a favorable omen. According to Lycophron,17 Ajax was born before Heracles came to Telamon, and the hero made the child invulnerable by wrapping him up in his lion's skin.18 Ajax is also mentioned among the suitors of Helen.19

During the war against Troy, Ajax, like Achilles, made excursions into neighboring countries. The first of them was to the Thracian Chersonesus, where he took Polydorus, the son of Priam, who had been entrusted to the care of king Polymestor, together with rich booty. Thence, he went into Phrygia, slew king Teuthras, or Teleutas, in single combat, and carried off great spoils, and Tecmessa, the king's daughter, who became his mistress.20 In the contest about the armor of Achilles, Agamemnon, on the advice of Athena, awarded the prize to Odysseus. This discomfiture threw Ajax into an awful state of madness. In the night he rushed from his tent, attacked the sheep of the Greek army, made great havoc among them, and dragged dead and living animals into his tent, fancying that they were his enemies. When, in the morning, he recovered his senses and beheld what he had done, shame and despair led him to destroy himself with the sword which Hector had once given him as a present.21

Less poetical traditions make Ajax die by the hands of others.22 His step-brother Teucrus was charged by Telamon with the murder of Ajax, but succeeded in clearing himself from the accusation.23

A tradition mentioned by Pausanias24 states, that from his blood there sprang up a purple flower which bore the letters αἰ (hai) on its leaves, which were at once the initials of his name and expressive of a sigh. According to Dictys Cretensis, Neoptolemus, the son of Achilles, deposited the ashes of the hero in a golden urn on Mount Rhoeteion; and according to Sophocles, he was buried by his brother Teucrus against the will of the Atreidae.25 Pausanias26 represents Ajax, like many other heroes, as living after his death in the island of Leuce. It is said that when, in the time of the emperor Hadrian, the sea had washed open the grave of Ajax, bones of superhuman size were found in it, which the emperor, however, ordered to be buried again.27 Respecting the state and wandering of his soul after his death, see Plato. De Re Publica, x, in fin.; Plutarch. Symposium ix, 5.

Ajax was worshiped in Salamis as the tutelary hero of the island, and had a temple with a statue there, and was honored with a festival, Aianteia.28 At Athens too he was worshiped, and was one of the eponymous heroes, one of the Attic tribes (Aeantis) being called after him.29 Not far from the town Rhoeteion, on the promontory of the same name, there was likewise a sanctuary of Ajax, with a beautiful statue, which Antonius sent to Egypt, but which was restored to its original place by Augustus.30 According to Dictys Cretensis31 the wife of Ajax was Glauca, by whom she had a son, Aeantides; by his beloved Tecmessa, he had a son, Eurysaces.32

Several illustrious Athenians of the historical times, such as Miltiades, Cimon, and Alcibiades, traced their pedigree to the Telamonian Ajax.33

The poet Sophocles (495-406 BCE) wrote about Ajax' tragic end in his drama Aiax.

The traditions about this hero furnished plentiful materials, not only for poets, but also for sculptors and painters. His single combat with Hector was represented on the chest of Cypselus;34 his statue formed a part of a large group at Olympia, the work of Lycius.35 A beautiful sculptured head, which is generally believed to be a head of Ajax, is still extant in the Egremont collection at Petworth.36

Ajax is mainly depicted on Greek vases, for example carrying the body of Achilles (François krater, ca. 570 BCE; Florance), or battling for Achilles body (amphora, ca. 550 BCE). His duel with Hector has been painted by Douris on a bowl (ca. 490 BCE; Paris) and Execias portrays him playing dice with Achilles (ca. 535 BCE; Vatican Museum).

For other occurances of the name "Ajax", click here.