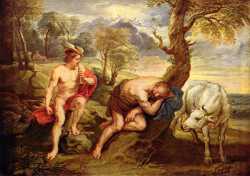 "All-seeing." Surnamed Panoptes. His parentage is stated differently, and his father is called Agenor, Arestor, Inachus, or Argus, whereas some accounts described him as an Autochthon.1 He derived his surname, Panoptes, the all-seeing, from his possessing a hundred eyes, some of which were always awake. He was of superhuman strength, and after he had slain a fierce bull which ravaged Arcadia, a satyr who robbed and violated persons, the serpent Echidna which rendered the roads unsafe, and the murderers of Apis, who was according to some accounts his father, Hera appointed him guardian of the cow into which Io had been metamorphosed.2

Zeus commissioned Hermes to carry off the cow, and Hermes accomplished the task, according to some accounts, by stoning Argus to death, or according to others, by sending him to sleep by the sweetness of his play on the flute and then cutting off his head. Hera transplanted his eyes to the tail of the peacock, her favorite bird.3

Argus as a guardian is shown on many Greek vases, among which an amphora from Clazomenae (6th century BCE; Munich), and on murals, such as in the Macellum in Pompeii and in the Casa di Livia on the Palatine Hill in Rome.

For other occurances of the name "Argus", click here.