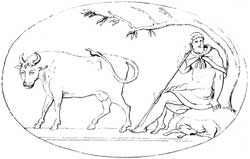 The traditions about this heroine are so manifold, that it is impossible to give any general view of them without some classification we shall therefore give first the principal local traditions, next the wanderings of Io, as they are described by later writers, and lastly mention the various attempts to explain the stories about her.

1. Local tra​ditions. The place to which the legends of Io belong, and where she was closely connected with the worship of Zeus and Hera, is Argos. The chronological tables of the priestesses of Hera at Argos placed Io at the head of the list of priestesses, under the name of Callirrhoe, or Callithyia.1 She is commonly described as a daughter of Inachus, the founder of the worship of Hera at Argos, and by others as a daughter of Iasus or Peiren. Zeus loved Io, but on account of Hera's jealousy, he metamorphosed her into a white cow. Hera thereupon asked and obtained the cow from Zeus, and placed her under the care of Argus Panoptes, who tied her to an olive tree in the grove of Hera at Mycenae. But Hermes was commissioned by Zeus to deliver Io, and carry her off. Hermes being guided by a bird (ἱέραξ, πῖκον), who was Zeus himself, slew Argus with a stone. Hera then sent a gad-fly, which tormented Io, and persecuted her through the whole earth, until at length she found rest on the banks of the Nile.3

This is the common story, which appears to be very ancient, since Homer constantly applies the epithet of Argeiphontes (the slayer of Argus) to Hermes. But there are some slight modifications of the story in the different writers. Some, for example, place the scene of the murder of Argus at Nemea.4 Ovid5 relates that Hermes first sent Argus to sleep by the sweetness of his music on the flute, and that he then cut off the head of Argus, whose eyes Hera transferred to the tail of the peacock, her favorite bird.6

A peculiar mournful festival was celebrated in honor of Io at Argos, and although we have no distinct statement that she was worshiped in the historical ages of Greece, still it is not improbable that she was.7 There are indeed other places, besides Argos, where we meet with the legends of Io, but they must be regarded as importations from Argos, either through colonies sent by the latter city, or they were transplanted with the worship of Hera, the Argive goddess. We may mention Euboea, which probably derived its name from the cow Io, and where the spot was shown on which Io was believed to have been killed, as well as the cave in which she had given birth to Epaphus.8

Another place is Byzantium, in the foundation of which Argive colonists had taken part, and where the Bosporus derived its name, from the cow Io having swam across it. From the Thracian Bosporus the story then spread to the Cimmerian Bosporus and Panticapaeum. Tarsus and Antioch likewise had monuments to prove that Io had been in their neighborhood, and that they were colonies of Argos. Io was further said to have been at Joppa and in Ethiopia, together with Perseus and Medusa;9 but it was more especially the Greeks residing in Egypt, who maintained that Io had been in Egypt, where she was said to have given birth to Epaphus, and to have introduced the worship of Isis, while Epaphus became the founder of a family from which sprang Danaus, who subsequently returned to Argos. This part of the story seems to have arisen from certain resemblances of religious notions, which subsequently even gave rise to the identification of Io and Isis. Herodotus10 tells us that Isis was represented like the Greek Io, in the form of a woman, with cows' horns.

2. The wanderings of Io. The idea of Io having wandered about after her metamorphosis appears to have been as ancient as the mythus respecting her, but those wanderings were extended and poetically embellished in proportion as geographical knowledge increased. The most important passage is in the Prometheus of Aeschylus,11 although it is almost impossible to reconcile the poet's description with ancient geography, so far as we know it.

From Argos Io first went to Molossis and the neighborhood of Dodona, and from thence to the sea, which derived from her the name of the Ionian. After many wanderings through the unknown regions of the north, she arrived in the place where Prometheus was fastened to a rock. As the Titan prescribes to her the course she has yet to take, it is of importance to ascertain the spot at which he begins to describe her course; but the expressions of Aeschylus are so vague, that it is a hopeless attempt to determine that spot. According to the extant play, it is somewhere in European Scythia, perhaps to the north of the river Istrus; but in the last play of the Trilogy, as well as in other accounts, the Caucasus is mentioned as the place where the Titan endured his tortures, and it remains again uncertain in what part of the Caucasus we have to conceive the suffering Titan.

It seems to be the most probable supposition, that Aeschylus himself did not form a clear and distinct notion of the wanderings he describes, for how little he cared about geographical accuracy is evident from the fact, that in the Supplices12 he describes the wanderings of Io in a very different manner from that adopted in the Prometheus. If, however, we place Prometheus somewhere in the north of Europe, the course he prescribes may be conceived in the following manner.

Io has first to wander towards the east, through unknown countries, to the Scythian nomads (north of Olbia), whom, however, she is to avoid, by traveling through their country along the sea-coast; she is then to have on her left the Chalybes, against whom she must likewise be on her guard. These Chalybes are probably the Cimmerians, who formerly inhabited the Crimea and the adjacent part of Scythia, and afterwards the country about Sinope. From thence she is to arrive on the river Hybristes (the Don or Cuban), which she is to follow up to its sources, in the highest parts of Mount Caucasus, in order there to cross it. Thence she is to proceed southward, where she is to meet the Amazons (who at that time are conceived to live in Colchis, afterwards in Themiscyra, on the river Thermodon), who are to conduct her to the place where the Salmydessian rock endangers all navigation. This latter point is so clear an allusion to the coast north of the mouth of the Bosporus, that we must suppose that Aeschylus meant to describe Io as crossing the Thracian Bosporus from Asia into Europe.

From thence he leads her to the Cimmerian Bosporus, which is to receive its name from her, and across the palus Maeotis. In this manner she would in part touch upon the same countries which she had traversed before. After this she is to leave Europe and go to Asia, according to which the poet must here make the Maeotis the boundary between Europe and Asia, whereas elsewhere he makes the Phasis the boundary. The description of the wanderings of Io is taken up again at verse 788. She is told that after crossing the water separating the two continents, she is to arrive in the hot countries situated under the rising sun. At this point in the description there is a gap, and the last passage probably described her further progress through Asia. Io then has again to cross a sea, after which she is to come to the Gorgonaean plains of Cisthenes (which, according to the scholiast, is a town of Ethiopia or Libya), and to meet the Graeae and Gorgones. The sea here mentioned is probably the so-called Indian Bosporus,12 where the extremities of Asia and Libya, India and Ethiopia, were conceived to be close to each other, and where some writers place the Gorgones.13

The mention, in the verses following, of the Grypes and Arimaspians, who are generally assigned to northern regions, creates some difficulty, though the poet may have mentioned them without meaning to place them in the south, but only for the purpose of connecting the misfortunes of Io with the best-known monsters. From the Indian Bosporus, Io is to arrive in the country of the black people, dwelling around the well of the sun, on the river Aethiops, that is, the upper part of the Nile or the Niger. She is to follow the course of that river, until she comes to the cataracts of the Nile, which river she is again to follow down to the Delta, where delivery awaits her.14

The mythus of Io is one of the most ancient, and at the same time one of the most difficult to explain. The ancients believed Io to be the moon, and there is a distinct tradition that the Argives called the moon Io.15 That Io is identical with the moon cannot be doubted,16 and the various things related of her refer to the phases and phenomena of the moon, and are intimately connected with the worship of Zeus and Hera at Argos. Her connection with Egypt seems to be an invention of later times, and was probably suggested by the resemblance which was found to exist between the Argive Io and the Egyptian Isis.

Io is usually depicted as a woman with small horns at her temples. Her likeness is found on many Greek vases and murals, such as the fresco at the Casa di Livia on the Palatine Hill in Rome: Io is seated on a rock, guarded by an armed Argus while Hermes is stealthily approaching on the other side. More recent is the painting by Correggio, "Io and Jupiter."

For other occurances of the name "Io", click here.