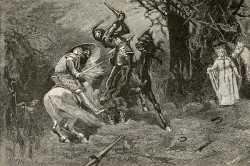 Gareth of Orkney, the youngest son of Lot and Morgause in the Arthurian romance. He and Gaheris are brothers in some texts, although in others they are fused into a single character. Gareth arrives at Arthur's court where he is initially mocked by Kay but welcomed, and eventually knighted. He falls in love with Lyones but their love is thwarted by her sister, until Arthur gives her to him. In the Vulgate Mort Artu he is accidentally killed at Carlisle by Lancelot, who does not recognize him in the melee surrounding Guinevere's rescue from the stake. Gawain vows vengeance against Lancelot and thus begins the disintegration of the Round Table.

Sir Thomas Mallory calls him Beaumains, because of his "large-handedness" or generosity. The French spelling is Gaheriet.