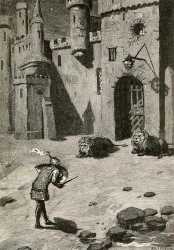 Lancelot — named du Lac ("of the Lake"). Undoubtedly the most famous of the Knights of the Round Table. While outwardly a model of chivalry, he is an internally torn and ultimately flawed being. He does not appear in any Welsh material nor in Geoffrey of Monmouth and no convincing model is evident. He may have derived from Irish or Breton myth. He is first introduced by Chrétien de Troyes and substantially enlarged by the Vulgate Cycle. Malory furthers his prominence.

Lancelot is the son of the King of Benoic, Ban. He is carried away from this province of western France by the Lady of the Lake. She raises him and presents him to Arthur's court upon his eighteenth birthday. His marshall prowess and inward nobility are soon apprehended by all. When not on the Quest, he meets with the Round Table and participates in the tournaments, often victoriously. He makes his home the northern castle of Joyous Gard, possibly Bamburgh, at the location of a British fort named Din Guayrdi.

Perhaps his most recognizable role is that of paramour to Arthur's queen, Guinevere. Though the Queen's treatment of him at court is aloof and disdainful, according to the tenets of courtly love, their love runs deep and is lasting, though stormy at times. Their love is also integral to Grail legend. While Lancelot is the guest of the Grail Keeper Pelles, Pelles contrives magically to have the knight sleep with his daughter Elaine in the guise of the Queen, whom he has led Lancelot to believe is in the area. Lancelot sleeps with Elaine and the result of their union is Galahad, the chosen Grail-knight. Upon reaching manhood, Galahad comes to court and many knights set forth on the Quest for the Grail. Lancelot himself is denied the Grail because of his aldultery. Ironically however, it is that love that conceived the knight that attains the Grail.

The love affair with the Queen is not unknown to the court who observe a silence on the subject until it is forced into the open by Mordred and Agravain. Arthur is forced to order the Queen's execution, for her infidelity is tantamount to treason. The attempt is made at Carlisle according to Malory. Lancelot and his men charge in to rescue her. In the ensuing fight, many knights are killed and Lancelot slays Gareth, the youngest brother to Gawain. Lancelot then carries the Queen off to Joyous Gard. This effectively splits the Round Table and, while the Queen is returned to her husband, Lancelot leaves with his followers to found a rival court in France. Arthur pursues with an army but peace is never restored. Gawain overtly foils attempts at armistice due to his hatred of Lancelot for killing his brother.

Arthur returns home upon Mordred's revolt and after Gawain dies, a recociliation becomes possible. Lancelot arrives too late, after the final battle and the departure of the King. The errant knight takes his leave of the penitent Queen and retires to the hermitage in Glastonbury with the other survivors where he dies after paying for his sins. His body is removed to Joyous Gard for entombment.