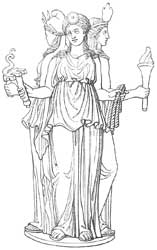 According to the most genuine traditions, she appears to have been an ancient Thracian divinity, and a Titan, who, from the time of the Titans, ruled in heaven, on the earth, and in the sea, who bestowed on mortals wealth, victory, wisdom, good luck to sailors and hunters, and prosperity to youth and to the flocks of cattle; but all these blessings might at the same time be withheld by her, if mortals did not deserve them. She was the only one among the Titans who retained this power under the rule of Zeus, and she was honored by all the immortal gods. She also assisted the gods in their war with the Gigantes, and slew Clytius.5

This extensive power possessed by Hecate was probably the reason that subsequently she was confounded and identified with several other divinities, and at length became a mystic goddess, to whom mysteries were celebrated in Samothrace6 and in Aegina.7 For being as it were the queen of all nature, we find her identified with Demeter, Rhea (Cybele or Brimo); being a huntress and the protector of youth, she is the same as Artemis (Curotrophos); and as a goddess of the moon, she is regarded as the mystic Persephone.8 She was further connected with the worship of other mystic divinities, such as the Cabeiri and Curetes,9 and also with Apollo and the Muses.10

The ground-work of the above-mentioned confusions and identifications, especially with Demeter and Persephone, is contained in the Homeric hymn to Demeter; for, according to this hymn, she was, besides Helios, the only divinity who, from her cave, observed the abduction of Persephone. With a torch in her hand, she accompanied Demeter in the search after Persephone; and when the latter was found, Hecate remained with her as her attendant and companion. She thus becomes a deity of the lower world; but this notion does not occur till the time of the Greek tragedians, though it is generally current among the later writers. She is described in this capacity as a mighty and formidable divinity, ruling over the souls of the departed; she is the goddess of purifications and expiations, and is accompanied by Stygian dogs.11 By Phorcys she became the mother of Scylla.12

There is another very important feature which arose out of the notion of her being an infernal divinity, namely, she was regarded as a spectral being, who at night sent from the lower world all kinds of demons and terrible phantoms, who taught sorcery and witchcraft, who dwelt at places where two roads crossed each other, on tombs, and near the blood of murdered persons. She herself too wanders about with the souls of the dead, and her approach is announced by the whining and howling of dogs.13

A number of epithets given her by the poets contain allusions to these features of the popular belief, or to her form. She is described as of terrible appearance, either with three bodies or three heads, the one of a horse, the second of a dog, and the third of a lion.14 In works of art she was some-times represented as a single being, but sometimes also as a three-headed monster.15

Besides Samothrace and Aegina, we find express mention of her worship at Argos16 and at Athens, where she had a sanctuary under the name of Epipyrgidia (Ἐπιπυργιδία), on the acropolis, not far from the temple of Nike.17 Small statues or symbolical representations of Hecate, called ἑκάταια (hekataia), were very numerous, especially at Athens, where they stood before or in houses, and on spots where two roads crossed each other; and it would seem that people consulted such ἑκάταια as oracles.18

At the close of every month dishes with food were set out for her and other averters of evil at the points where two roads crossed each other; and this food was consumed by poor people.19 The sacrifices offered to her consisted of dogs, honey, and black female lambs.20

Hecate is portrayed in single form on sculptures of Myron and Naucydes. The first sculpture of Hecate in triple form was the (lost) statue by Alcamenes (fifth century BCE) at the Acropolis. Numerous smaller sculptures of Hecate remain in which the goddess appears as three separate women, wearing chitons, with the backs pressed against a pillar. Hecate is usually depicted with a burning torch in her hand and with a dog laying at her feet, its head raised. She is depicted on the altar of Pergamon with one body and three heads (ca. 170 BCE). In single form she appears on Greek vases and coins. Her attributes, besides the torch, are the snake, whip, dagger, and sword. On her head she sometimes wears a kalathos, a tall wicker basket, or a moon sickle.