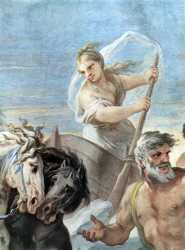 "Rainbow." A daughter of Thaumas (whence she is called Thaumantias)1 and Electra, and sister of the Harpies.2 In the Homeric poems she appears as the minister of the Olympian gods, who carries messages from Ida to Olympus, from gods to gods, and from gods to men.3

In accordance with these functions of Iris, her name is commonly derived from ἐρῶ εἴρω (erō eirō); so that Iris would mean "the speaker or messenger:" but it is not impossible that it may be connected with εἴρω (eirō), "I join," whence εἰρήνη (eirēnē); so that Iris, the goddess of the rainbow, would be the joiner or conciliator, or the messenger of heaven, who restores peace in nature. In the Homeric poems, it is true, Iris does not appear as the goddess of the rainbow, but the rainbow itself is called ἶρις (iris):4 and this brilliant phenomenon in the skies, which vanishes as quickly as it appears, was regarded as the swift minister of the gods. Her genealogy too supports the opinion that Iris was originally the personification of the rainbow. In the earlier poets, and even in Theocritus5 and Virgil6 Iris appears as a virgin goddess; but according to later writers, she was married to Zephyrus, and became by him the mother of Eros.7

With regard to her functions, which we have above briefly described, we may further observe, that the Odyssey never mentions Iris, but only Hermes as the messenger of the gods: in the Iliad, on the other hand, she appears most frequently, and on the most different occasions. She is principally engaged in the service of Zeus, but also in that of Hera, and even serves Achilles in calling the winds to his assistance.8 She further performs her services not only when commanded, but she sometimes advises and assists of her own accord.9

In later poets she appears on the whole in the same capacity as in the Iliad, but she occurs gradually more and more exclusively in the service of Hera, both in the later Greek and Latin poets.10 Some poets describe Iris actually as the rainbow itself, but Servius11 states that the rainbow is only the road on which Iris travels, and which therefore appears whenever the goddess wants it, and vanishes when it is no longer needed: and it would seem that this latter notion was the more prevalent one in antiquity.

Respecting the worship of Iris very few traces have come down to us, and we only know that the Delians offered to her on the island of Hecate cakes made of wheat and honey and dried figs.12

No statues of Iris have been preserved, but we find her frequently represented on vases and in bas-reliefs, either standing and dressed in a long and wide tunic, over which hangs a light upper garment, with wings attached to her shoulders, and carrying the herald's staff in her left hand; or she appears flying with wings attached to her shoulders and sandals, with the staff and a pitcher in her hands.