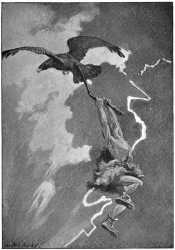 A jötunn, the father of Skaði. He dwelt in Þrymheimr. Þjazi is most notable for his abduction of the goddess Iðunn. The story of the theft and rescue is found in the poem Haustlöng by the Norwegian skald Þjóðólfr of Hvinir and in the Skáldskaparmál section of the Prose Edda.

Snorri Sturluson has Bragi tell the visiting Ægir of the many things which had come to pass among the Æsir. Bragi opens with the story of Þjazi's abduction of Iðunn:

He began the story at the point where three of the Æsir, Odin and Loki and Hœnir, departed from home and were wandering over mountains and wastes, and food was hard to find. But when they came down into a certain dale, they saw a herd of oxen, took one ox, and set about cooking it. Now when they thought that it must be cooked, they broke up the fire, and it was not cooked. After a while had passed, they having scattered the fire a second time, and it was not cooked, they took counsel together, asking each other what it might mean. Then they heard a voice speaking in the oak up above them, declaring that he who sat there confessed he had caused the lack of virtue in the fire. They looked thither, and there sat an eagle; and it was no small one. Then the eagle said: "If ye are willing to give me my fill of the ox, then it will cook in the fire." They assented to this. Then he let himself float down from the tree and alighted by the fire, and forthwith at the very first took unto himself the two hams of the ox, and both shoulders. Then Loki was angered, snatched up a great pole, brandished it with all his strength, and drove it at the eagle's body. The eagle plunged violently at the blow and flew up, so that the pole was fast to the eagle's back, and Loki's hands to the other end of the pole. The eagle flew at such a height that Loki's feet down below knocked against stones and rock-heaps and trees, and he thought his arms would be torn from his shoulders. He cried aloud, entreating the eagle urgently for peace; but the eagle declared that Loki should never be loosed, unless he would give him his oath to induce Idunn to come out of Ásgard with her apples. Loki assented, and being straightway loosed, went to his companions; nor for that time are any more things reported concerning their journey, until they had come home.

But at the appointed time Loki lured Idunn out of Ásgard into a certain wood, saying that he had found such apples as would seem to her of great virtue, and prayed that she would have her apples with her and compare them with these. Then Thjazi the giant came there in his eagle's plumage and took Idunn and flew away with her, off into Thrymheimr to his abode.

But the Æsir became straitened at the disappearance of Idunn, and speedily they became hoary and old. Then those, Æsir took counsel together, and each asked the other what had last been known of Idunn; and the last that had been seen was that she had gone out of Ásgard with Loki. Thereupon Loki was seized and brought to the Thing, and was threatened with death, or tortures; when he had become well frightened, he declared that he would seek after Idunn in Jötunheim, if Freyja would lend him the hawk's plumage which she possessed. And when he got the hawk's plumage, he flew north into Jötunheim, and came on a certain day to the home of Thjazi the giant. Thjazi had rowed out to sea, but Idunn was at home alone: Loki turned her into the shape of a nut and grasped her in his claws and flew his utmost.

Now when Thjazi came home and missed Idunn, he took his eagle's plumage and flew after Loki, making a mighty rush of sound with his wings in his flight. But when the Æsir saw how the hawk flew with the nut, and where the eagle was flying, they went out below Ásgard and bore burdens of plane-shavings thither. As soon as the hawk flew into the citadel, he swooped down close by the castle-wall; then the Æsir struck fire to the plane-shavings. But the eagle could not stop himself when he missed the hawk: the feathers of the eagle caught fire, and straightway his flight ceased. Then the Æsir were near at hand and slew Thjazi the giant within the Gate of the Æsir, and that slaying is exceeding famous.

Þjazi's daughter Skaði goes to Ásgarðr to avenge her father's death. The Æsir buy her off, mainly by offering her one of the Æsir in marriage. Odin, by way of atonement, took Þjazi's eyes and cast them up into heaven where they became two stars. In the poem Hárbarðsljóð, Thor claims to have killed Þjazi and to have cast the jötunn's eyes into the heavens.

The event is also found in a verse by Bragi Bodasson, and quoted by Snorri in Skáldskaparmál:

He who threw the dead eyes
Of Thjazi, Skadi's father,
Into the Winds' Wide Basin
O'er the abodes of men-folk many.

Snorri adds that Þjazi's father was named Alvaldi (Ölvaldi) and that he was very rich in gold. After his death, his sons came to divide their inheritance, and they determined upon this measure for the gold which they divided: each should take as much as his mouth would hold, and all the same number of mouthfuls. Þjazi's brothers are named Iði and Gangr.