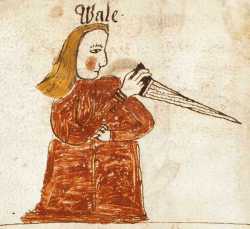 The youngest of Odin's sons. His mother is the giantess Rindr. Váli was birthed for the sole purpose of slaying Höðr in revenge for Höðr's accidental murder of his brother Baldr. According to Baldrs draumar, he accomplished his task when only one night old:

Rind a son shall bear,
in the western halls:
he shall slay Odin's son,
when one night old.
He a hand will not wash,
nor his head comb,
ere he to the pile has borne
Baldr's adversary.

In Völuspa (Codex Regius), the seeress says something similar, but does not mention the mother. Váli is only explicitly named in Völuspá hin skamma:

There were eleven
Æsir reckoned,
when Baldr on
the pile was laid;
him Vali showed himself
worthy to avenge,
his own brother:
he the slayer slew.

Interestingly, the parts of Váli's birth and the slaying of Höðr are entirely omitted in Snorri Sturluson's version of Baldr's death in Gylfaginning, although Snorri does say that Váli can be periphrased as Baldr's Avenger and Foe and Slayer of Höðr. Snorri describes Váli as daring in fights, and a most fortunate marksman. Víðarr and Váli and destined to survive Ragnarök, for neither sea nor the fire of Surtr shall have harmed them.

In Skáldskaparmál he is listed among the twelve Æsir present at the banquet for Ægir. Other kennings for Váli are Son of Odin and Rindr, Stepson of Frigg, Brother of the Æsir, and Dweller in the Homesteads of the Fathers.

The name appears in some versions of Völuspá as that of a dwarf. It is also the name of a son of Loki.

For other occurances of the name "Váli", click here.