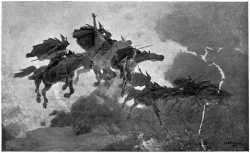 "Chooser of the slain." In Norse mythology, the valkyries are the handmaidens of Odin. They ride their horses over battlefields to escort the souls of bravest warriors killed in battle to Valhalla, in order to re-enforce the gods for their final struggle at Ragnarök. They are also called "Wish-Maidens," as the fulfillers of Odin's wishes.

The names of the valkyries differ in the eddic poems. Another complication is that human women of heroic legends were endowed with the qualities of both valkyries and swan-maidens, as in the cases of Brynhildr, Sigrún, Kára, Sváva.

"There are besides these a great many other goddesses, whose duty it is to serve in Valhalla; to bear in the drink and take care of the drinking-horns and whatever belongs to the table. They are named in Grimnismal, and are called Valkyrjor. Odin sends them to every field of battle, to make choice of those who are to be slain, and to sway the victory. Gudur, Rota, and the youngest of the Norns, Skuld, also ride forth to choose the slain and turn the combat."

In Skáldskaparmál, chapter 48, Snorri says that weapons and armor should be periphrased in figures of battle, and with reference to Odin and the valkyries. A shield is called Tent; and a shield-wall is termed Hall and Roof, Wall and Floor. Thus, a kenning for shields is Tents of Hlökk, as the skald Grettír sang:

Hlökk's Tent-Raisers held their noses
Together, and the heroes
Of the Rain-Storm of Hildr's Shield-Wall
Hewed at each other's beards.