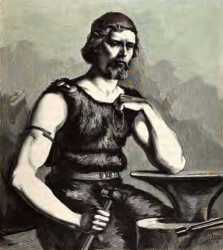 A legendary master blacksmith. He is attested in the eddic poem Völundarkviða and in Þiðrekssaga. Völundr and his brothers Egil and Slagfiðr were the sons of a Finnish king, and each married a valkyrie — Hervör alvitr, Ölrún, and Hlaðguðr svanhvít respectively. When their wives disappeared after nine winters, Egil and Slagfiðr set out to pursue them but Völundr stayed behind in Úlfdalir ("wolf-dales") to await her return. He fashioned seven hundred rings from red gold and strung these on ropes of bast.

When king Níðuðr, who was after Völundr's gold, learned that Völundr remained in Úlfdalir alone, he sent his warriors to the smith's home. They found the seven hundred rings but took only one, leaving the rest behind. When Völundr returned from his hunting he counted his rings and found one missing, and thought that his wife had returned and taken it. So long he waited that he fell asleep, and when he awoke he was bound by Níðuðr's men.

Níðuðr's gave to his daughter Böðvildr the golden ring which had been taken from Völundr's home, while he himself appropriated the smith's sword. Völundr's reaction is described by Níðuðr's wife in verse 16:

His teeth he shows,
when the sword he sees,
and Bödvild's ring
he recognizes:
threatening are his eyes
as a glistening serpent's:
let be severed
his sinews' strength;
and set him then
in Sævarstad.

Völundr was hamstrung and imprisoned on the small island of Sævarstöð. He there forged all kinds of jewelry for Níðuðr. No one was allowed to visit him, save the king. After some time he managed to persuade Níðuðr's two youngest sons to come visit him alone, promising them the gold they craved. They returned the next day and Völundr cut off their heads and hid their bodies under the bellows. Their skulls he set in silver and sent them to Níðuðr. He fashioned gems from their eyes and gave them to Níðuðr's wife. From their teeth he wrought two brooches and gave them to Böðvildr.

When later Böðvildr came to the island to have her ring repaired, Völundr plied her with beer and when she fell to sleep he raped her. His vengeance complete, he rose up in the air, using a pair of wings which he had fashioned himself. Böðvildr, pregnant with Völundr's child, fled from the island.

Níðuðr asked Völundr what had become of his two young sons. Before he answered, the smith made Níðuðr swear that he would not harm his wife, Hervör, and then proceeded to tell the king precisely what he had done to his family. Then, laughing, the smith rose in the air and flew away.

In Þiðrekssaga, he is called Velent, and is held captive by king Niðung of Jutland. He escapes through the help of his brother Egil, who fashioned for him a pair of wings from some birds he shot.