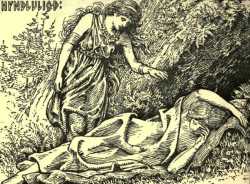 A völva who is wakened by the goddess Freyja and asked to trace the ancestry of her protégé Óttar, for the purpose of deciding a wager. Hyndla detects Óttar, and accuses Freyja of having brought her lover with her on the dead-road, but Freyja denies the accusation, saying she is only accompanied by her boar Hildisvíni.

Hyndla saddles one of her wolfs and together they ride to Valhalla. During the trip Hyndla gives a complex genealogy of Óttars ancestry, which includes many ancient heroes. Toward the end of the poem, Freyja orders Hyndla to bring the memory-beer to her guest so that he may remember all that has been said. Freyja thus seems to admit that Hildisvíni is in fact Óttar who has been temporarily transformed into a boar. It appears that the seeress was well aware of the fact because throughout the poem she addresses Óttar directly, ending each stanza with All that race it thine, Ottar Heimski! (heimski, "the foolish").

Hyndla finishes with a final caustic comment on Freyja's morals, saying that many have crawled under Freyja's apron and that the goddess goes out into the night as a she-goat among goats. Freyja threatens to burn Hyndla alive, and Hyndla replies that she sees the earth on fire, and that many will have their lives to save. The mead, mixed with poison, is then brought to her. Freyja says that Hyndla's malediction shall have no effect, for Óttar shall drink delicious drafts and she shall pray to the gods to favor Óttar.

Hyndla does not appear elsewhere in the poems.