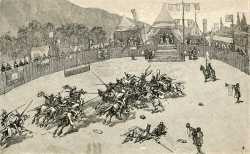 The seat of Arthur's power in medieval romance. The name is of unknown origin and refers to the castle but also includes the surrounding town. The village name of Camel occurs in relation to Cadbury Castle in Somerset. Archeology has shown that this association is no passing fancy but its relationship with Cadbury's Arthurian lore is uncertain.

Camelot appears, most significantly, as a personal capital as opposed to a permanent or national one. It is Arthur's and Arthur's alone. There are no previous lords and Arthur's successor, Constantine, does not take up residence there. Camelot is actually said to have been demolished after Arthur and Lancelot were gone by Mark. Fazio degli Uberti, the Italian poet, claims to have seen the ruins in the fourteenth century.

Camelot is first named in Chrétien de Troyes' Lancelot, though hinted at by Geoffrey's earlier Caerleon, but becomes prominent only in the Vulgate Cycle and after. Thirteenth century writers describe a river, forest and surrounding plain. Camelot is also imbued with a religious aura. Not only do knights receive the sacrament of baptism there but it is also the departure point for the Grail Quest. Its location, however, continues to be vague at best. Malory eventually identifies it with Winchester, rival of London and capital of King Alfred's Wessex. He was quite possibly influenced by the existence of Winchester's "Round Table," a thirteenth century construction that was widely accepted as the original artifact in Malory's time. This line of thought, however, denies the uniquely Arthurian nature of the place. Malory's own editor, William Caxton, rejects it in favor of a Welsh location, possibly the Roman ruins at Caerwent.

Others have speculated that Camelford, in Cornwall and south of the location Geoffrey names as the place of Arthur's final battle, is the fabled city. No romancer, on the other hand, would have placed Arthur's headquarters that far west and within the kingdom of Mark. Camelot remains, however, a medieval utopia, a dream city that cannot be placed geographically. While Cadbury and others might have serious claims to being the prototype, none can claim to be the actual place.