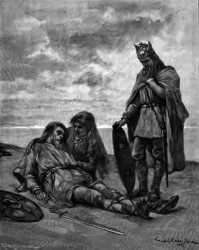 The eponymous hero of the eddic poem Helgakviða Hjörvarðssonar. He was the son of king Hjörvarðr and his fourth wife, Sigrlinn, the daughter of king Sváfnir. He was tall and comely, and taciturn, and had no fixed name. As he was sitting on a mound he saw nine valkyries, one of whom was of most noble aspect. This valkyrie, named Sváva, gave him his name and afterwards often protected him in battle.

Hjörvarðr supplied Helgi with an army to avenge the death of his maternal grandfather. He obtained a sword in Sigarsholm, and afterwards he and Atli went and slew Hróðmarr, the king responsible for Sváfnir's death. They then performed many deeds of valor, among which the slaying the jötunn Hati, as he sat on a crag. They encountered the jötunn's daughter, Hrímgerðr, who engaged them in a contest of flyting. The contests lasted throughout the night and in the morning she was turned to stone.

Helgi went to king Eylimi and demanded his daughter Sváva in marriage, and she became his wife. She stayed at home with her father while he engaged in warfare. Helgi was challenged to a battle by a chieftain named Álfr, a son of the late king Hróðmarr, three days hence. Before the appointed time he met his brother Heðinn, who told him that he had made a rash vow at the Bragi-cup to possess Helgi's wife Sváva. Helgi told his brother not to worry, but as he spoke he had a foreboding that his death was at hand, and that his fylgja (attendant spirit) had accosted Heðinn, when he saw the troll-wife riding on a wolf.

In the battle with Álfr at Frekastein, Helgi was mortally wounded. He sent his attendant Sigarr to fetch Sváva. When they were reunited, he told her to "prepare a couch for Heðinn, and clasp the young prince in her arms." Heðinn then vowed not to return ere he had avenged his brother's death.

Helgi and Sváfa were reborn as Helgi Hundingsbane and Sigrún.