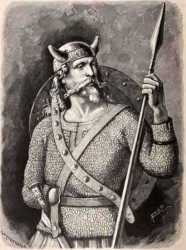 One of the Æsir. Týr is associated with battle and war. He says in the eddic poem Hymiskviða that he is the son of Hymir, a jötunn:

"There dwell eastward
of Elivagar
the all-wise Hýmir,
at heaven's end.
My sire, fierce of mood,
a kettle owns,
a capacious caldron,
a rast in depth."

In the poem he sets out with Thor to obtain Hymir's huge cauldron for Ægir, so that he might brew for the Æsir. Týr twice tries to move the vessel but is unable to, but Thor lifts it on his head and with it they return home. Týr's grandmother, whom he greatly loathed, had a full nine hundred heads. Hymir's wife, Týr's mother, is described as decked in gold and white of brow. Nothing further is known of either woman.

Yet remains that one of the Æsir who is called Týr: he is most daring, and best in stoutness of heart, and he has much authority over victory in battle; it is good for men of valor to invoke him. It is a proverb, that he is Týr-valiant, who surpasses other men and does not waver. He is wise, so that it is also said, that he that is wisest is Týr-prudent. This is one token of his daring: when the Æsir enticed Fenris-Wolf to take upon him the fetter Gleipnir, the wolf did not believe them, that they would loose him, until they laid Týr's hand into his mouth as a pledge. But when the Æsir would not loose him, then he bit off the hand at the place now called 'the wolf's joint;' and Týr is one-handed, and is not called a reconciler of men.

The story of Fenrir's binding and the loss of Týr's hand is told in Gylfaginning, chapter 34. The gods perceived by prophecy that from the offspring of Loki and Angrboða great misfortune would befall them, so Odin had these children brought to him. He threw the serpent Jörmungandr into the deep sea, Hel he cast into Niflheimr, but the third child, the wolf Fenrir, the Æsir brought up at home. Týr alone dared to go to him to give him meat. When the gods saw how much the wolf grew every day, and when all prophecies declared that he was fated to be their destruction, the Æsir sought to bind him. The first two attempts failed so they had made an unbreakable fetter called Gleipnir, and enticed the wolf to let himself be bound with it. Fenrir, who suspected trickery, agreed only on the condition that one of them puts his hand in the wolf's mouth as a token of good faith. None of the assembled was willing to part with his hand, until Týr stretched out his right hand and laid it in the wolf's mouth:

But when the Wolf lashed out, the fetter became hardened; and the more he struggled against it, the tighter the band was. Then all laughed except Týr: he lost his hand.

The event is also referenced to in Lokasenna, stanzas 38 and 39. In the same poem Loki claims to have fathered a son on Týr's wife, but there is no other reference to either the woman or the child. Loki also accuses Týr of never having known how to mediate something good between two people.

According to Snorri in Gylfaginning, at the time of Ragnarök Týr shall do battle with the hound Garmr, rather than Fenrir, and each become the other's slayer.

The singular form of his name often occurs in kennings for the other Æsir. It is also a compound in various names of Odin, i.e., Fimbultýr, Geirtýr, Hangatýr, Hroptatýr, Reiðartýr, Sigtýr, etc. The plural form, tívar, simply means "gods." Týr's name is also found in the name Tuesday, derived from Old English Tiwesdæg and Middle English Tewesday, from Tīw (Týr), who was equated with Mars in the interpretatio germanica; it corresponds to dies Martis ("day of Mars").

Týr is periphrased in Skáldskaparmál as One-handed God, and Fosterer of the Wolf, God of Battles, and Son of Odin. He was one of the Æsir present at the feast held for the visiting Ægir.