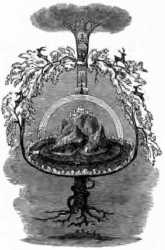 In Norse cosmology there were nine worlds or realms, most of which are the home world for one of the various races of beings.

In Völuspá the seeress says that she remembers nine worlds, and in Vafþrúðnismál the giant Vafþrúðnir states that he has traveled over each of the nine worlds. Snorri Sturluson in Gylfaginning says that Odin cast Hel into Niflheimr and gave her power over the nine worlds. These worlds are unified by the world-tree, the giant ash Yggdrasil that stands at the center of the universe.

There is no definitive list of the nine worlds, but these are generally mentioned:

The realm of Hel is often held identical to Niflheimr or part thereof. In some texts the name svártalfar, "black elves", refer to the dvergar, "dwarfs," while in others they are two distinct groups. Thus the world of the dwarfs may be Niðavöllum or Niðavellir.