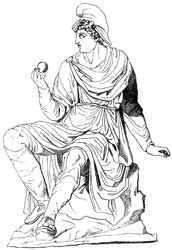 Also called Alexander, was the second son of Priam and Hecabe. Previous to his birth Hecabe dreamed that she had given birth to a firebrand, the flames of which spread over the whole city. This dream was interpreted to her by Aesacus, or according to others by Cassandra,1 by Apollo,2 or by a Sibyl,3 and was said to indicate that Hecabe should give birth to a son, who should bring about the ruin of his native city, and she was accordingly advised to expose the child. Some state that the soothsayers urged Hecabe to kill the child, but as she was unable to do so, Priam exposed him.4 The boy accordingly was entrusted to a shepherd, Agelaus, who was to expose him on Mount Ida. But after the lapse of five days, the shepherd, on returning to Mount Ida, found the child still alive, and fed by a she-bear. He accordingly took back the boy, and brought him up along with his own child, and called him Paris.5

When Paris had grown up, he distinguished himself as a valiant defender of the flocks and shepherds, and hence received the name of Alexander, i.e. the defender of men. He now also succeeded in discovering his real origin, and found out his parents.6 This happened in the following manner: — Priam, who was going to celebrate a funeral solemnity for Paris, whom he believed to be dead, ordered a bull to be fetched from the herd, which was to be given as a prize to the victor in the games. The king's servants took the favorite bull of Paris, who therefore followed the men, took part in the games, and conquered his brothers. One of them drew his sword against him, but Paris fled to the altar of Zeus Herceius, and there Cassandra declared him to be her brother, and Priam now received him as his son.7

Paris then married Oenone, the daughter of the river god Cebren. As she possessed prophetic powers, she cautioned him not to sail to the country of Helen; but as he did not follow her advice,8 she promised to heal him if he should be wounded, as that was the only aid she could afford him.9 According to some he became, by Oenone, the father of Corythus, who was afterwards sent off by his mother to serve the Greeks as guide on their voyage to Troy.10 Paris himself is further said to have killed his son from jealousy, as he found him with Helen.11 It should, however, be mentioned that some writers call Corythus a son of Paris by Helen.

When Peleus and Thetis solemnized their nuptials, all the gods were invited, with the exception of Eris. But the latter appeared, nevertheless, but not being admitted, she threw a golden apple among the guests, with the inscription, "to the fairest."12 Hera, Aphrodite and Athena began to dispute as to which of them the apple should belong. Zeus ordered Hermes to take the goddesses to Mount Gargarus, a portion of Ida, to the beautiful shepherd Paris, who was there tending his flocks, and who was to decide the dispute.13 Hera promised him the sovereignty of Asia and great riches, Athena great glory and renown in war, and Aphrodite the fairest of women, Helen, in marriage. Hereupon Paris declared Aphrodite to be the fairest and deserving of the golden apple. This judgment called forth in Hera and Athena fierce hatred of Troy.14 Under the protection of Aphrodite, Paris now carried off Helen, the wife of Menelaus, from Sparta.15

The accounts of this rape are not the same in all writers, for according to some Helen followed her seducer willingly and without resistance, owing to the influence of Aphrodite,16 while Menelaus was absent in Crete;17 some say that the goddess deceived Helen, by giving to Paris the appearance of Menelaus;18 according to others Helen was carried off by Paris by force, either during a festival or during the chase.19

Respecting the voyage of Paris to Greece, there likewise are different accounts. Once, it is said, Sparta was visited by a famine, and the oracle declared that it should not cease, unless the sons of Prometheus — Lycus and Chimaereus, who were buried at Troy — were propitiated. Menelaus accordingly went to Troy, and Paris afterwards accompanied him from Troy to Delphi.20 Others say that Paris involuntarily killed his beloved friend Antheus, and therefore fled with Menelaus to Sparta.21

The marriage between Paris and Helen was consummated in the island of Cranae, opposite to Gytheium, or at Salamis. 22 On his return with his bride to Troy, Paris passed through Egypt and Phoenicia, and at length arrived in Troy with Helen and the treasures which he had treacherously taken from the hospitable house of Menelaus.23 In regard to this journey the accounts again differ, for according to the Cypria Paris and Helen reached Troy three days after their departure,24 whereas, according to later traditions, Helen did not reach Troy at all, for Zeus and Hera allowed only a phantom resembling her to accompany Paris to Troy, while the real Helen was carried to Proteus in Egypt, and remained there until she was fetched by Menelaus.25

The carrying off of Helen from Sparta gave rise to the Trojan war. When the Greeks first appeared before Troy, Paris was bold and courageous;26 but when Menelaus advanced against him, he took to flight. As Hector upbraided him for his cowardice, he offered to fight in single combat with Menelaus for the possession of Helen.27 Menelaus accepted the challenge, and Paris though conquered was removed from the field of battle by Aphrodite.28 The goddess then brought Helen back to him, and as she as well as Hector stirred hint up, he afterwards returned to battle, and slew Menesthius.29 He steadily refused to give up Helen to the Greeks, though he was willing to restore the treasures he had stolen at Sparta.30

Homer describes Paris as a handsome man, as fond of the female sex and of music, and as not ignorant of war, but as dilatory and cowardly, and detested by his own friends for having brought upon them the fatal war with the Greeks. He killed Achilles by a stratagem in the sanctuary of the Thymbraean Apollo;31 and when Troy was taken, he himself was wounded by Philoctetes with an arrow of Heracles,32 and then returned to his long abandoned first wife Oenone. But she, remembering the wrong she had suffered, or according to others being prevented by her father, refused to heal the wound, or could not heal it as it had been inflicted by a poisoned arrow. He then returned to Troy and died. Oenone soon after changed her mind, and hastened after him with remedies, but came too late, and in her grief hanged herself.33 According to others she threw herself from a tower, or rushed into the flames of the funeral pile on which the body of Paris was burning.34

Paris was represented in works of art as a youthful man, without a beard and almost feminine beauty, with the Phrygian cap, and sometimes with an apple in his hand, which he presented to Aphrodite.36 Many monuments depict the judgment of Paris, the abduction of Helen, and the killing of Achilles. An Ionic amphora (late sixth century BCE; Munich) depicts -- in humorous style -- Paris with his flock and his dog, while Zeus, Hermes, and the three goddesses approach him. The abduction of Helen is depicted on a Attic vase by Hieron and Macron (490 BCE; Boston). Paris is here portrayed as a warrior with helmet and spear, carrying Helen with him, while Eros hovers above them.

Pompeian frescoes often depict the same scenes, such as the judgment at the Casa di Olconio Rufo.