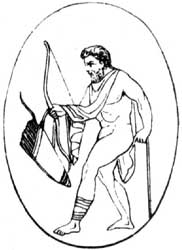 A son of Poeas (whence he is called Poeantiades)1 and Demonassa, the most celebrated archer in the Trojan war.2 He led the warriors from Methone, Thaumacia, Meliboea, and Olizon, against Troy, in seven ships. But on his voyage thither he was left behind by his men in the island of Lemnos, because he was ill of a wound which he had received from the bite of a snake, and Medon, the son of Oileus and Rhene, undertook the command of his men.3

This is all that the Homeric poems relate of him, with the addition that he returned home in safety;4 but the cyclic and tragic poets have spun out in various ways this slender groundwork of the story of Philoctetes. He is said to have been the disciple, friend, and armor-bearer of Heracles,5 who instructed him in the art of using the bow, and who bequeathed to him his bow, with the never-erring poisoned arrows.6 These presents were a reward for his having erected and set fire to the pile on Mount Oeta, where Heracles burnt himself.7 According to others, however, it was Poeas, Morsimus, Hyllus, or Zeus himself who performed that service to Heracles.8

Philoctetes also was one of the suitors of Helen, and, according to some traditions, it was this circumstance that obliged him to take part in the Trojan war.9 On his journey thither, while staying in the island of Chryse, he was bitten by a snake. This misfortune happened to him as he was showing to the Greeks the altar of Athena Chryse, and approached too near to the serpent which was guarding the temple of the goddess,10 or while he was looking at the tomb of Troilus in the temple of Apollo Thymbraeus, or as he was showing to his companions the altar of Heracles,11 or lastly during a sacrifice which Palamedes offered to Apollo Smintheus.12 Hera, it is said, was the cause of this misfortune, being enraged at Philoctetes having performed the above-mentioned service to Heracles,13 though some related that the snake's bite was the consequence of his not having returned the love of the nymph Chryse.14 According to some accounts, moreover, the wound in his foot was not inflicted by a serpent, but by his own poisoned arrows.15

The wound is said to have become ulcerated, and to have produced such an intolerable smell, and such intolerable pains, that the moanings of the hero alarmed his companions. The consequence was, that on the advice of Odysseus, and by the command of the Atreidae, he was exposed and left alone on the solitary coast of Lemnos.16 According to some he was there left behind, because the priests of Hephaestus in Lemnos knew how to heal the wound,17 and Pylius, a son of Hephaestus, is said to have actually cured him,18 while, according to others, he was believed to have died of the wound.19

According to the common tradition, the sufferer remained in Lemnos during the whole period of the Trojan war, until in the tenth year Odysseus and Diomedes came to him as ambassadors, to inform him that an oracle had declared that without the arrows of Heracles Troy could not be taken. The tradition which represents him as having been cured, adds that while the war against Troy was going on, he, in conjunction with Euneus, conquered the small islands about the Trojan coast, and expelled their Carian inhabitants. As a reward for these exploits he received a part of Lemnos, which he called Acesa (from ἀκέομαι, I heal), and at the request of Diomedes and Neoptolemus, he then proceeded to Troy to decide the victory by his arrows.20 According to the common story, however, Philoctetes was still suffering when the ambassadors arrived, but he nevertheless followed their call.

After his arrival before Troy, Apollo sent him into a profound sleep, during which Machaon (or Podalirius, or both, or Asclepius himself) cut out the wound, washed it with wine, and applied healing herbs to it.21 Philoctetes was thus cured, and soon after slew Paris, whereupon Troy fell into the hands of the Greeks.22

On his return from Troy he is said to have been cast upon the coast of Italy, where he settled, and built Petelia and Crimissa. In the latter place he founded a sanctuary of Apollo Alaeus, to whom he dedicated his bow.23 Afterwards a band of Rhodians also came to Italy, and as they became involved in war with the colonists from Pallene, Philoctetes assisted the Rhodians, and was slain. His tomb and sanctuary, in which heifers were sacrificed to him, were shown at Macalla.24