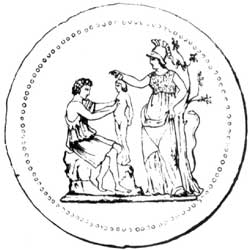 "Forethought." Is sometimes called a Titan, though in reality he did not belong to the Titans, but was only a son of the Titan Iapetus (whence he is designated by the patronymic Iapetionides, Ἰαπετιονίδης1) by Clymene, so that he was a brother of Atlas, Menoetius, and Epimetheus.2 His name signifies "forethought," as that of his brother Epimetheus denotes "afterthought." Others call Prometheus a son of Themis,3 or of Uranus and Clymene, or of the Titan Eurymedon and Hera.4 By Pandora, Hesione, or Axiothea, he is said to have been the father of Deucalion,5 by Pyrrha or Clymene he begot Hellen (and according to some also Deucalion6), and by Celaeno he was the father of Lycus and Chimaereus,7 while Herodotus8 calls his wife Asia.

The following is an outline of the legends related of him by the ancients. Once in the reign of Zeus, when gods and men were disputing with one another at Mecone (afterwards Sicyon9), Prometheus, with a view to deceive Zeus and rival him in prudence, cut up a bull and divided it into two parts: he wrapped up the best parts and the intestines in the skin, and at the top he placed the stomach, which is one of the worst parts, while the second heap consisted of the bones covered with fat. When Zeus pointed out to him how badly he had made the division, Prometheus desired him to choose, but Zeus, in his anger, and seeing through the stratagem of Prometheus, chose the heap of bones covered with the fat. The father of the gods avenged himself by withholding fire from mortals, but Prometheus stole it in a hollow tube (νάρθηξ, narthēx).10

Zeus now, in order to punish men, caused Hephaestus to mold a virgin, Pandora, of earth, whom Athena adorned with all the charms calculated to entice mortals; Prometheus himself was put in chains, and fastened to a pillar, where an eagle sent by Zeus consumed in the daytime his liver, which, in every succeeding night, was restored again. Prometheus was thus exposed to perpetual torture, but Heracles killed the eagle and delivered the sufferer, with the consent of Zeus, who thus had an opportunity of allowing his son to gain immortal fame.11

Prometheus had cautioned his brother Epimetheus against accepting any present from Zeus, but Epimetheus, disregarding the advice, accepted Pandora, who was sent to him by Zeus, through the mediation of Hermes. Pandora then lifted the lid of the vessel in which the foresight of Prometheus had concealed all the evils which might torment mortals in life. Diseases and sufferings of every kind now issued forth, but deceitful hope alone remained behind.12 This is an outline of the legend about Prometheus, as contained in the poems of Hesiod.

Aeschylus, in his trilogy Prometheus, added various new features to it, for, according to him, Prometheus himself is an immortal god, the friend of the human race, the giver of fire, the inventor of the useful arts, an omniscient seer, an heroic sufferer, who is overcome by the superior power of Zeus, but will not bend his inflexible mind. Although he himself belonged to the Titans, he is nevertheless represented as having assisted Zeus against the Titans,13 and he is further said to have opened the head of Zeus when the latter gave birth to Athena.14 But when Zeus succeeded to the kingdom of heaven, and wanted to extirpate the whole race of man, the place of which he proposed to give to quite a new race of beings, Prometheus prevented the execution of the scheme, and saved the human race from destruction.15 He deprived them of their knowledge of the future, and gave them hope instead.16 He further taught them the use of fire, made them acquainted with architecture, astronomy, mathematics, the art of writing, the treatment of domestic animals, navigation, medicine, the art of prophecy, working in metal, and all the other arts.17

But, as in all these things he had acted contrary to the will of Zeus, the latter ordered Hephaestus to chain him to a rock in Scythia, which was done in the presence of Cratos and Bia, two ministers of Zeus. In Scythia he was visited by the Oceanides; Io also came to him, and he foretold her the wanderings and sufferings which were yet in store for her, as well as her final relief.18 Hermes then likewise appears, and desires him to make known a prophecy which was of great importance to Zeus, for Prometheus knew that by a certain woman Zeus would beget a son, who was to dethrone his father, and Zeus wanted to have a more accurate knowledge of this decree of fate. But Prometheus steadfastly refused to reveal the decree of fate, whereupon Zeus, by a thunderbolt, sent Prometheus, together with the rock to which he was chained, into Tartarus.19

After the lapse of a long time, Prometheus returned to the upper world, to endure a fresh course of suffering, for he was now fastened to Mount Caucasus, and tormented by an eagle, which every day, or every third day, devoured his liver, which was restored again in the night.20 This state of suffering was to last until some other god, of his own accord, should take his place, and descend into Tartarus for him.21 This came to pass when Chiron, who had been incurably wounded by an arrow of Heracles, desired to go into Hades; and Zeus allowed him to supply the place of Prometheus.22 According to others, however, Zeus himself delivered Prometheus, when at length the Titan was prevailed upon to reveal to Zeus the decree of fate, that, if he should become by Thetis the either of a son, that son should deprive him of the sovereignty.23

There was also an account, stating that Prometheus had created men out of earth and water, at the very beginning of the human race, or after the flood of Deucalion, when Zeus is said to have ordered him and Athena to make men out of the mud, and the winds to breathe life into them.24 Prometheus is said to have given to men something of all the qualities possessed by the other animals.25 The kind of earth out of which Prometheus formed men was shown in later times near Panopeus in Phocis,26 and it was at his suggestion that Deucalion, when the flood approached, built a ship, and carried into it provisions, that he and Pyrrha might be able to support themselves during the calamity.27

Prometheus, in the legend, often appears in connection with Athena, e.g., he is said to have been punished on Mount Caucasus for the criminal love he entertained for her28 and he is further said, with her assistance, to have ascended into heaven, and there secretly to have lighted his torch at the chariot of Helios, in order to bring down the fire to man.29

At Athens Prometheus had a sanctuary in the Academy, from whence a torch-race took place in honor of him.30

Prometheus was chained to a rock in Caucasus Mountains, which in the Greek world was believed to be end of the world. Aeschylus wrote the drama Prometheus Bound.

In older Greek art Prometheus is depicted as a beardless youth, later as an older figure with a beard. His suffering and his liberation by Heracles are the subject of many Greek vase paintings. In Roman art he is more often regarded as the creator of humans. More recent art portrays him as the hero who stole fire from the heavens for the betterment of mankind.