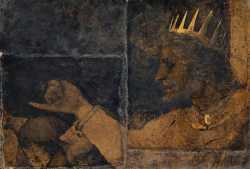 "He enlarges the people." The successor of Solomon on the throne, and apparently his only son. He was the son of Naamah "the Ammonitess," an Ammonitish princess.1 He was forty-one years old when he ascended the throne, and he reigned seventeen years (c. 930-913 BCE). Although he was acknowledged as the rightful heir to the throne, yet there was a strongly-felt desire to modify the character of the government. The burden of taxation to which they had been subjected during Solomon's reign was very oppressive, and therefore the people assembled at Shechem and demanded from the king an alleviation of their burdens. He went to meet them at Shechem, and heard their demands for relief.2

After three days, having consulted with a younger generation of courtiers that had grown up around him, instead of following the advice of elders, he answered the people haughtily.3 "My father made your yoke heavy, but I will add to your yoke. My father disciplined you with whips, but I will discipline you with scorpions." The terrible cry was heard:4 "What portion have we in David? Neither have we inheritance in the son of Jesse: To your tents, O Israel: Now see to thine own house, David."5

This brought matters to a crisis and the kingdom was rent in twain. Rehoboam was appalled, and tried concessions, but it was too late.6 The tribe of Judah, Rehoboam's own tribe, alone remained faithful to him. Benjamin was reckoned along with Judah, and these two tribes formed the southern kingdom, with Jerusalem as its capital; while the northern ten tribes formed themselves into a separate kingdom, choosing Jeroboam as their king. Rehoboam tried to win back the revolted ten tribes by making war against them, but he was prevented by the prophet Shemaiah7 from fulfilling his purpose.

In the fifth year of Rehoboam's reign, Shishaq, one of the kings of Egypt of the Assyrian dynasty, stirred up, no doubt, by Jeroboam his son-in-law, made war against him. Jerusalem submitted to the invader, who plundered the temple and virtually reduced the kingdom to the position of a vassal of Egypt.8

Rehoboam died in the fifty-eighth year of his age, and was buried with his fathers in the city of David.9 He was succeeded by his son Abijah. Rehoboam had 18 wives and 60 concubines, who bore him 28 sons and 60 daughters.