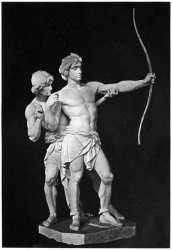 "Warrior." A son of Odin, and half-brother of Baldr. Snorri Sturluson says the following about him in Gylfaginning, chapter 28:

One of the Æsir is named Hödr: he is blind. He is of sufficient strength, but the gods would desire that no occasion should rise of naming this god, for the work of his hands shall long be held in memory among gods and men.

Höðr caused the death of Baldr, as was prophesied in the eddic poems Völuspá and Baldrs draumar. Because of Baldr's dreams, Frigg extracted oaths from all things not to harm Baldr. Odin fears something defective and rides into Hel, where he raises a völva from the dead and starts to question her. He asks her who Baldr's slayer will be, and she answers:

Hödr will hither
his glorious brother send,
he of Baldr will
the slayer be,
and Odin's son
of life bereave.

Next Odin asks her who will avenge Baldr's death, and the völva answers that Rindr shall bear in the western halls a son who shall slay Höðr when he is only one night old. This avenger, Váli, is only explicitly named in Völuspá hin skamma.

Snorri in Gylfaginning says that the Æsir would amuse themselves by shooting at Baldr or beating him with stones, knowing that he could not be hurt. This greatly displeased Loki. He made himself into the likeness of a woman and asked Frigg if all things had taken oaths to spare Baldr. The goddess replied that she did not ask the mistletoe, because she thought it too young to ask the oath of. Straightway Loki took the mistletoe and went to the Thing:

Snorri entirely omits Váli's vengeance and Höðr's death; he mentions only the punishment of Loki. Snorri is also the one who says that Höðr was blind, which is not found in the Poetic Edda, nor is Loki's involvement. According to Völuspá, stanza 62, after the apocalyptic events at Ragnarök, both Baldr and Höðr shall return from Hel to govern the new world, and shall dwell in Hroptr's hall.

In Skáldskaparmál Höðr is periphrased as the Blind God, Baldr's Slayer, Thrower of the Mistletoe, Son of Odin, Companion of Hel, and Foe of Váli.

An comparable story is found in Saxo Grammaticus' Gesta Danorum. Here, the mortal hero Høtherus and the demigod Balderus compete for the hand of Nanna, the daughter of King Gevarus. Høtherus kills Balderus, but is himself killed in a battle many years later by Bous, the son of Othinus and Rinda, and half-brother of Balderus. In the Old English epic poem Beowulf, how Hæþcyn, the son of Hreðel, accidentally kills his older brother Herebeald with an arrow during a hunting trip. Hæþcyn is slain at Ravenswood, fighting against Ongenþeow.