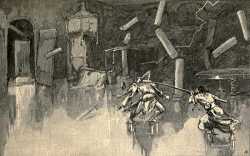 Balin and Balan. Brothers, appearing first in the Suite du Merlin and later in Malory, who aid Arthur in his early struggles to gain and consolidate his power. The violent Balin, also called Balin le Sauvage and The Knight with Two Swords, beheads the Lady of the Lake in an act of family vengeance. He later kills a knight named Garlon, brother to Pellam, at Pellam's castle. Pellam is wounded by Balin with a lance in an attempt to avenge Garlon. The lance is the Dolorous Stroke or lance of Longinus that pierced the side of Christ (see Bleeding Lance). Pellam lies wounded for many years with his lands becoming waste, to be healed only by by the achiever of the Grail, the knight Galahad.

For his sacrilegious use of the Holy Lance, Balin is doomed. He and Balan kill each other over a misunderstanding and are buried together in the same tomb. Merlin implants the sword of Balin in a block of marble where it stays until withdrawn by Galahad, proving his vocation as Grail-achiever.

This story is told by Mallory in Book II and an altered version appears in Tennyson's Idylls of the King.

For other occurances of the name "Balin", click here.