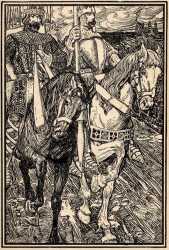 The brother of Bors, and father of Hector de Maris and of Lancelot. First named in the Vulgate Lancelot. He is the sage king of Benoic in western France. Ban is defeated by his foe, Claudas of Berry, dying while Lancelot is but an infant. For this reason Lancelot is taken to be raised by the Lady of the Lake.

Malory creates in Ban an early ally of Arthur in his struggles to consolidate power against rebellious vassals. Lancelot is himself made lord of Benoic. "Benwick" claims Malory, is the name of a real city, possibly Bayonne.