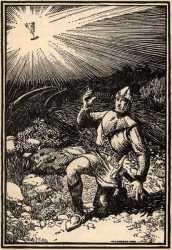 "grāl." Grail (Graal) — Magic vessel with miraculous healing powers protected by an otherworldly keeper or "king." Pagan fertility myths and their related talismans along with the concept of a symbiotic union between the king and the land were all precursors to what was to eventually become the object of Arthur and his knights' Quest. There is a subsequent Christian reassessment that reassigns its powers to the spiritual rather than physical realm although the mysterious iconography related to it never quite disappears.

The word Graal in Old French denoted a large platter or serving dish. Chrétien de Troyes, in the Conte del Graal, recounts the visit of Percival to the wounded Fisher King's stronghold where a maiden, after a procession of bizarre objects, bears a magnificently bejeweled graal. This graal has the supernatural power to sustain life and is of sacred origin. Percival's failure to inquire about the strange procession prevents the healing of the Fisher King. Celtic myths of magic vessels and cauldrons are clearly the inspiration.

Many later authors have taken up the theme with a maze of intricate alterations and adaptations. Not only are the versions in wild variance, there is no uniform shape for the object or a consensus as to what it actually is. There are several themes that are recurrent like the wound motif. The wound itself may be sexual in origin and is directly related to the fact that the land is dying around the keep. If asked the proper question by a questor, "Who is served by the Grail?", the king and wasteland will revive. There are sometimes two kings, Fisher and Grail, but the Grail King is largely unseen. Female devotees often attend the Grail and it is often accompanied by the Bleeding Lance, and other hallowed objects.

The Christianization of the Grail in plain terms begins with Robert de Boron and is adapted by his successors into a larger myth. The "Holy Grail" or Sangreal is the cup Jesus uses to create the Eucharist at the Last Supper making it inextricably tied to the presence of the Spirit in the sacraments of the altar, transubstantiation and communion. Following Chretien's thread but with a major shift in emphasis, the Grail now nourishes the soul and spiritual life above bodily world.

The history of the Grail never sinks to mere relic status and a complicated history evolves around it. After the Last Supper, it is said to have passed into the hands of Joseph of Arimathea who then collected drops of blood from the Crucifixion in it. Jesus taught Joseph, after the Resurrection, certain secret words that would unlock the secrets of the Grail. Joseph took the Grail, now a symbol of divine love and the source of visionary enlightenment, under his care and with his companions traveled to Britain. The Grail was brought first to Avalon and the future site of Glastonbury. Next it passed into the possession of successive secretive Grail Keepers in a mysterious castle like the one visited by Percival.

The Vulgate Queste del Saint Graal develops this story the furthest and is Malory's basis. Arthur's quest has now become the second stage in a series of events begun earlier. It becomes known that contact with the Grail is to be reestablished in Arthur's time though how is not known. Galahad is first introduced as the successful questor. After the Grail's ethereal apparition appears in Arthur's hall, a great many knights are immediately inspired to ride out and seek its reality. Each knight is miraculously nourished by the food their choice so some of the Celtic elements have not disappeared entirely. The quest itself may be adapted from an alternate Celtic myth in which Arthur quests for a cauldron that endures, albeit slightly, in The Spoils of Annwfn. The Grail now is almost entirely connected with Christian miracles and visions though other pre-Christian elements appear from time to time. The ultimate desire of the Quest is to comprehend the mysteries of the Grail so consequently much more than locating or seeing it is involved in its attainment. This attainment is the result of divine providence rather than valor or ability and Galahad, in fulfillment of various signs, is the destined Grail achiever. Though other knights in the quest sometimes get partial glimpses of the Grail, only Galahad is pure and worthy of its supreme revelation. After following the Grail to Sarras, Galahad dies in ecstatic rapture.

The vision itself is related to Dante's at the end of Paradiso, a personal awareness of the source of eternity and Godhead and the manifestation of Christ on Earth. Mary, Dante's intercessor, also plays a significant role in the romance Perlevaus and Galahad's rapture come during her mass in the Queste.

There is no consistency among the Grail romances. Diverging wildly from Chrétien and Christian myth, von Eschenbach's Parzival makes the Grail a stone originating from the stars. Its unchristian features are perhaps partly what caused the Church to never recognize the Grail as legitimate dogma. This was also partly due to the featured prominence of women in the ritual aspects of the Grail and its emphasis on secret, esoteric and questionable mysticism that bred suspicion among the Christian community. While Joseph is recognized in the chronicles of Glastonbury as the Abby's founder, no mention of the Grail is made and the concept never attains an orthodox form. The quest itself is sometimes intimated to be one of the causes for the dissolution of the Round Table, drawing away its best and bravest knights and inadvertently initiating a moral decline that culminates in the triumph of Mordred's plots in destroying the order.