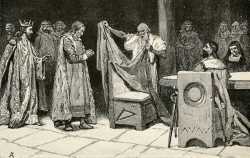 The son of Lancelot and Elaine of Corbenic. Pelles the Grail Keeper is her father. Pelles orchestrates by magical means the sexual encounter between his daughter and Lancelot by making her appear to him as Guinevere. He does this in order to insure that the destined Grail-achiever would carry the blood of Joseph of Arimathea. Upon coming of age, Galahad comes to court where several signs reveal him to be this destined knight. He is the only one capable of sitting in the Siège Perilous and he can withdraw a sword, fixed by Merlin long ago, from a block of stone.

Galahad is named first in the Vulgate Cycle though foreshadowed in the Perlesvaus. His story is told primarily in the Queste del Saint Graal. Though valorous and attractive, his overriding attribute is his chastity — absolutely essential for attainment of the Grail and why Lancelot, though noble in so many ways, can never succeed in the Quest. But he succeeds, in a way, through his son. Galahad has many adventures on the Quest, finally attaining his vision in Sarras and dying.

In medieval eyes, Galahad was seen as Christ-like. His name is derived from Gilead or "Galaad" in the Vulgate Bible1 and his character in part is an attempt to meld Christian and chivalric beliefs. His Welsh name is Gwalchafed, "Falcon of Summer."