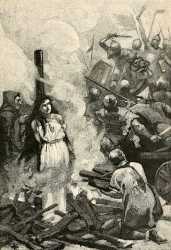 Arthur's queen. According to Giraldus Cambrensis, the inscribed cross from the royal grave at Glastonbury named her as Arthur's second wife. Nothing is known of this first wife. Since the only surviving drawing of the cross only depicts one side and, presumably, any allusion to the queen was on the other, the claim of Giraldus is unverifiable. Those who believe Arthur died and was buried at Glastonbury generally accept that Guinevere was buried with him.

By the hand of Geoffrey of Monmouth, Guinevere becomes a beautiful lady with a Roman heritage, raised in the house of Duke Cador of Cornwall. Little else is said until the end of Arthur's reign when she betrays the King by becoming the lover of the usurper Mordred. However, while the two are in battle, she runs away to Caerleon and enters a convent. The recurring theme of her entanglement with men besides her husband, whether by consent or abduction, has many variations. When kidnapped, she must be saved. On the archivolt in Modena Cathedral is a depiction, maybe pre-Geoffrey, of Arthur rescuing the queen. He must do it again in Caradoc's Vitae of Gildas, this time the queen having been abducted by King Melwas of Somerset. When connected to the theme of infidelity later, the rescuer becomes not her husband but Lancelot.

These depictions might arise from a misinterpretation of the traditions of Celtic queens. A Celtic queen, like Medb of the Irish saga Táin Bó Cúailnge, was the equal of her husband in power and wealth. She also had affairs without reproach. Medieval writers could not have seen this free and equal behaviour as anything but stubborn infidelity. Their altered social perceptions would have precluded any true understanding hence Guinevere has since been cast as the unfaithful woman.

The romances depict her as the daughter of Leodegrance, previous owner of the Round Table, which she brings as part of her dowry to Arthur. She has a doppelgänger named the False Guinevere, another daughter of Leodegrance, who tempts Arthur away from court. The Queen's conduct is given further excuse by Arthur's encounters with Morgause and other women. Whereas the Welsh are always critical of her, the continental writers show a sympathy for her that cause them to break totally from Geoffrey. They redirect the Queen's attentions from Mordred, whose lustful advances are rejected with scorn, to Lancelot, a more noble and magnificent character.

The affair is well established by the time of Chrétien de Troyes. A constant problem for writers is the King's disposition about it. Rare among literary characters, Arthur is cuckolded yet is able to retain his dignity. He refuses to acknowledge the problem until it is scandalously forced into the open by Agravain. When Arthur tries to fufill his duty and execute her, she is resued by Lancelot but the ensuing conflicts and rivalries signal the beginning of the end to Arthur's golden age.

In Malory, the Queen reaches a depth that had only been hinted at by his predecessors. She becomes giving and tragically passionate. She is childless in a marriage to a man she respects but does not love and in love with a man she can never have. The love affair with Lancelot, while jealous and sometimes cruel, endures and is undeniable. She enters the convent at Amesbury after the final battle. Lancelot visits her there and she sends him away with a fond but penitent farewell, realizing that their deeds have brought about the ruin of the noblest group the world has known. Malory says, "She was a true lover and therefore she had a good end."