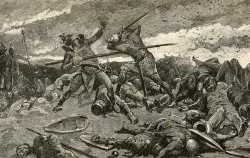 The traitorous leader of the rebellion that leads to Arthur's downfall. Originally named Medraut, a legendary and possibly historical Welsh figure who disagrees with Arthur and does battle with him at Camlann, with fatal results for both.

However, the Welsh do not make him plotting or evil. Geoffrey of Monmouth is responsible for the villainous role he assumes in later medieval literature. Possibly revealing an other than Welsh influence, Geoffrey changes the name to Mordred, a Cornish or Breton name. Mordred is Arthur's nephew who rules jointly with Guinevere during Arthur's campaign in Gaul. Modred persuades the Queen into an adulterous affair and usurps the throne, making peace with the hated Saxons, whom Arthur had destroyed at Badon. Arthur speeds home and engages him by the River Camel in Cornwall. The rebellious usurper is killed and Arthur is borne to Avalon.

Mordred's villainy continues in the romances. His lust for Guinevere is heightened but she now spurns his advances. This is a possible provocation for his plot with Agravain to expose the Queen's affair with Lancelot. In the Vulgate Cycle, his unnatural evil nature is augmented by making him the secret son Arthur with his half-sister, Morgause. Though the incest was unknowing and unintentional, it forges Mordred as a nemesis for the King. This fact is not universal. Some texts downplay his sinister wickedness even allowing for regretfulness. Parting entirely from the Cornish connection, the Romancers place the final battle near Salisbury.