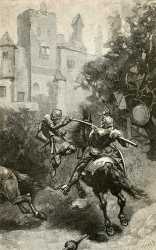 The son of Mitrides (or Aupatis) and the brother of Caradoc. He defeated several Knights of the Round Table and threw them in his dungeon, among whom Hector de Maris and Lionel, where they were daily whipped with briars. Sir Tarquine kept a bronze bowl hanging from a lone tree by an important river crossing and passing knights would ring it as a bell to summon him. Invariably, Tarquine would win. The challenging knight would be incarcerated and his shield hung on the tree as a warning to others.

When Lancelot discovers who holds his brother Hector prisoner, he challenges Tarquine to single combat. They fight for over two days until Lancelot finally strikes Turquine down. According to Malory,1 Lancelot slays Turquine in a tournament on behalf of King Bagdemagus.