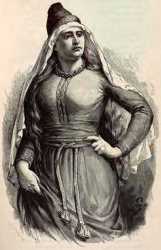 "Lady." The goddess of married love and of the hearth, wife of Odin and mother of the god Baldr. Snorri Sturluson says that she is the foremost of the Ásynjur. Her residence is Fensalir and her servants are Fulla and Gná. Frigg knows all the fates of men, though she speaks no prophecy. According to Snorri she is the daughter of a certain Fjörgyinn. Several other goddesses are associated with her, namely Fulla, who bears her ashen coffer; Hlín, who keeps over those men Frigg desires to preserve from any danger; and Gná, whom Frigg sends into divers lands on her errands. Among her possessions is a hawk-plumage, which allows its wearer to fly.

Although Frigg is frequently mentioned, she plays only a minor part in the eddic poems. Her name is found twice in Völuspá: stanza 37 says that she bewailed the death of her son, and stanza 53 says that her beloved will fall.

In Vafþrúðnismál Odin plans to visit the giant Vafþrúðnir and Frigg councils him to stay home because, she says, no giant is as mighty as Vafþrúðnir. When Odin decides to go anyhow she bids him a safe journey and safe return.

She appears in the prose introduction to Grímnismál, where they discuss their foster children Agnar and Geirröðr, but not in the actual poem:

Odin and Frigg were sitting in Hlidskialf, looking over all the world. Odin said, Seest thou Agnar, thy foster-son, where he is getting children with a giantess in a cave? while Geirröd, my foster-son, is a king residing in his country. Frigg answered, He is so inhospitable that he tortures his guests, if he thinks too many come. Odin replied that that was the greatest falsehood; and they wagered thereupon. Frigg sent her waiting-maid Fulla to bid Geirröd be on his guard, lest the trollmann who was coming should do him harm, and also say that a token whereby he might be known was, that no dog, however fierce, would attack him. But that King Geirröd was not hospitable was mere idle talk. He, nevertheless, caused the man to be secured whom no dog would assail. He was clad in a blue cloak, and was named Grimnir, and would say no more concerning himself, although he was questioned. The king ordered him to be tortured to make him confess, and to be set between two fires; and there he sat for eight nights.

In the poem Baldrs draumar, her son Baldr began to have disturbing dreams of his own demise, so the gods solicited from every being assurance not to harm him, and all species swore oaths to spare him. Snorri expands on this story in Gylfaginning 49:

When Baldr told these dreams to the Æsir, then they took counsel together: and this was their decision: to ask safety for Baldr from all kinds of dangers. And Frigg took oaths to this purport, that fire and water should spare Baldr, likewise iron and metal of all kinds, stones, earth, trees, sicknesses, beasts, birds, venom, serpents. And when that was done and made known, then it was a diversion of Baldr's and the Æsir, that he should stand up in the Thing, and all the others should some shoot at him, some hew at him, some beat him with stones; but whatsoever was done hurt him not at all, and that seemed to them all a very worshipful thing.

But when Loki Laufeyarson saw this, it pleased him ill that Baldr took no hurt. He went to Fensalir to Frigg, and made himself into the likeness of a woman. Then Frigg asked if that woman knew what the Æsir did at the Thing. She said that all were shooting at Baldr, and moreover, that he took no hurt. Then said Frigg: Neither weapons nor trees may hurt Baldr: I have taken oaths of them all. Then the woman asked: Have all things taken oaths to spare Baldr? and Frigg answered: There grows a tree-sprout alone westward of Valhall: it is called Mistletoe; I thought it too young to ask the oath of. Then straightway the woman turned away; but Loki took Mistletoe and pulled it up and went to the Thing.

After Baldr's death, Frigg sent Hermóðr to Hel to plead for her son's return.

In Lokasenna, Loki accuses Frigg of being ever lustful in love, and says that she slept with both her brothers-in-law. This is echoed by Snorri Sturluson in Ynglinga saga, where during Odin's exile he shared everything with his brother Vili and Vé, including Frigg. Danish historian Saxo Grammaticus recounts how Frigg, jealous of Odin's success, cuckolds him with a slave.

In Völsunga saga, king Rerir prayed to the gods that he might be blessed with a child. His prayer was heard by Odin, and by Frigg as well, and she sent Hljóð, the daughter of Hrímnir, to bring him an apple of fertility. (In some translations it is Freyja who sends Hljóð.)

Friday is named after her, from Frīġedæġ, "day of Frigg." Frigg is often identified with Freyja, and was equated with the Roman goddess of love, Venus.

Snorri Sturluson says that Frigg can be periphrased by calling her Daughter of Fjörgynn, Wife of Odin, Mother of Baldr, Co-Wife of Jörd and Rindr and Gunnlöd and Grídr, Mother-in-law of Nanna, Lady of the Æsir and Ásynjur, Mistress of Fulla and of the Hawk-Plumage and of Fensalir.