Sword in the Stone 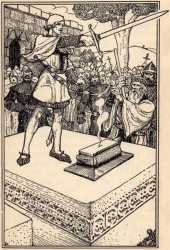 According to traditional accounts, Arthur's royalty is revealed when, as a young man, he is able to pull a sword from a block of stone. The story apparently originated with Robert de Boron in his Merlin romance and is absent from Geoffrey of Monmouth. In the works of De Boron and Malory, the sword is embedded in an anvil but some later writers have omitted the anvil. In the Vulgate and thereafter, the test of the Sword in the Stone also serves to reveal Galahad as the preordained Grail Knight. In Malory, it is Balin's sword that Merlin inserts into a stone, where it remained until Galahad removed it.